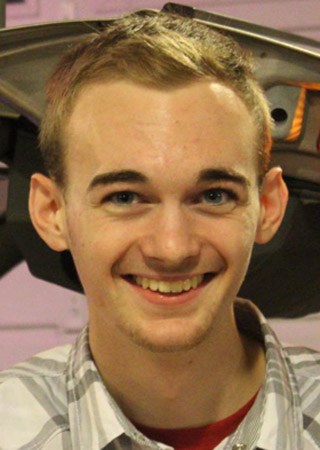 Collin lived a very full and meaningful life as an avid lover of the outdoors, a talented woodworker, and close to his family who loved and will miss him tremendously. In his company, his intelligence, and sense of humor were enjoyed and valued by all. Collin was a uniquely sensitive young man with a caring spirit who made relationships special.

His interests and talents were in common with his great-grandfather, Ward O'Hara, whom he often said he wished he could have met. Collin held his great-grandmother, Ruth McCarty O'Hara, in the highest regard and spent many hours in conversation with her in her home, never minding the 75 year difference in age. Collin also deeply enjoyed spending time with and working with both of his grandfather's and his Uncle Lloyd on special projects, always learning new skills and trades along the way. His love for family also included special bonds with his brother, Dillon, and his step-siblings. Collin also treasured his time spent with his "Aunt Jackie" during their regular luncheon dates.

Collin's roots were in Union Springs, where he graduated from high school in 2017. It was during this time that Collin made enduring friendships. It wasn't uncommon to see Collin with the likes of Jeff Day, Tad Patterson, Danny Mallon, Parker Morhiser, Riley Evener, and his much beloved step-brother, Nolan Signor, laughing and having the times of their life.

Post graduation, Collin took classes at Cayuga Community College. During this time he continued to develop his passion around the stock market and wood working. He became an avid and successful day trader and producer of finely crafted wood furniture.

Collin will be missed more than any words can express. He is survived by his father, Dustin (Julie), his mother, Donna (John Waite), his brother, Dillon, his step-siblings, Nolan, Dylan, Johnny, Jenna, and June, his paternal-grandfather, Ted O'Hara (Bronwyn), his paternal grandmother, Joan Smith, his maternal-grandfather Craig Meneilly (Isabelle Klima), his maternal-grandmother, Marsha Meneilly (Jon Mosher), as well as a host of loving friends and relatives.

Friends and family are invited to visit with Collin's family at the Ward O'Hara Agricultural Museum from 4:00-7:00 pm on Thursday, October 21, 2021. To conclude the visiting hours, a short service will begin at 6:30 that all are welcomed to attend. A private burial ceremony for the family will be held Friday, October 22, 2021. Condolences may be made at www.brewfuneralhome.com.

Published by The Citizen on Oct. 19, 2021.
To plant trees in memory, please visit the Sympathy Store.
MEMORIAL EVENTS
Oct
21
Visitation
4:00p.m. - 7:00p.m.
Ward O'Hara Agricultural Museum
NY
Oct
21
Service
6:30p.m.
Ward O'Hara Agricultural Museum
NY
Funeral services provided by:
Brew Funeral Home
MAKE A DONATION
MEMORIES & CONDOLENCES
Sponsored by Brew Funeral Home.
7 Entries
Fly high young man
Theresa Casler Dutton
Other
October 22, 2021
No words can express my deepest condolences and the pain you must be experiencing. Just know that Collin is loved and my heart is so heavy right now. Sending prayers, love and light to the O'Hara family.
Angel
October 20, 2021
Rest in peace Collin. You will be sadly missed.
Mark, Dale and Mark Antonik
Friend
October 20, 2021
Collin had such a kind and genuine soul. His care for the environment was very admirable. I enjoyed seeing his complex mind work through his hands on projects. The times I saw him he always had a smile on his face and a great sense of humor. My love and prayers go to Dusty, Julie, Nolan, Dylan, and the rest of his family and friends.
Nick Kehoe
October 19, 2021
Thinking of you and your family in this difficult time. Sending love and prayers.
Jennifer janus
Friend
October 19, 2021
Our deep condolences to this tragic news. Collin was a very bright, caring kid. Its very hard to lose a loved one, and any length of time will not heal. Too young.
thomas shallcross
October 19, 2021
To the family of this young man my heart goes out to all of you at this time. He was so young and had his whole life ahead of him. I will pray for all of you I wish I had the chance to meet him.
Jean O'Hara
Family
October 19, 2021
Showing 1 - 7 of 7 results