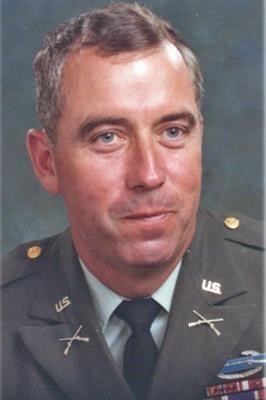 LTC Schrader was born in Staten Island, NY and was raised in Manchester, ME., later making Evans, GA his home in 1985. He studied at Norwich University and completed his undergraduate studies at the University of Maine. LTC Schrader received his Masters of Public Administration from Georgia State University and completed further studies at Augusta University. He went on to be an Instructor and Dean at Aiken Technical College. LTC Schrader retired from the US Army after 24 years. He served 2 tours in Vietnam, initially as a Pathfinder Detachment Commander for the 11th Aviation Battalion and later as a Company Commander and Operations Officer with the 5/12 Infantry Regiment, 199th Light Infantry Brigade. LTC Schrader retired in 1987. He was a member of the Augusta Richmond County Historical Society and devoted to interviewing veterans from WWII through Vietnam. LTC Schrader was also a member of Trinity on the Hill United Methodist Church, Jones Creek Golf Club and an active volunteer with Vets to Washington.

Memorial services will be Monday, June 26, 2017 at 2:00 P.M. with Rev. Dr. Mike Cash officiating. Inurnment will follow at Westover Memorial Park with full military honors. Honorary Pallbearers will be the Focus Class.

Memorial contributions may be made to Trinity Music Ministry, 1300 Monte Sano Avenue, Augusta, GA 30904. The family would like to thank Homestead Hospice for their loving care and support.

Published by The Augusta Chronicle on Jun. 23, 2017.
To plant trees in memory, please visit the Sympathy Store.
MEMORIAL EVENTS
To offer your sympathy during this difficult time, you can now have memorial trees planted in a National Forest in memory of your loved one.
Funeral services provided by:
Thomas Poteet & Son Funeral Directors - Augusta
MAKE A DONATION
MEMORIES & CONDOLENCES
5 Entries
Great friend for many years. May you rest in peace with God's comfort and blessing. Sorry this is so late, but I just found out from the Cony newsletter.
Robert Royal
June 4, 2018
Just heard of Stan's passing. I worked with him at Aiken Tech years ago. One of the nicest people I have ever known.
Varina Haney
April 26, 2018
I know he will be missed, especially by the veterans he supported so loyally. Take care of yourself, Geri. Thinking of you all.
Pat Hall
June 25, 2017
Steve i am so sorry for your loss. You and your family are in my prayers.
Debra Thomaston
June 23, 2017
Mike Tokarska
June 23, 2017
Showing 1 - 5 of 5 results