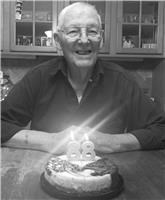 BORN
1931
DIED
2021
Age 89 passed away Sept. 9, 2021. Born Oct. 22, 1931 to Olaf and Bergliote Olsen in Brooklynn, N.Y. Preceded in death by his loving wife of 42 year, Dorothy Ann Woltman Olsen. Also his mother and father, sister Marion Omdahl, brother Eddie Olsen and son-in-law Gerald (Skip) Smith Jr. Survived by his son John R. Olsen, wife Maureen of West Haven, Conn; daughter Karen A. Smith of Leona Valley, Calif; daughter Victoria L. Means and husband Daniel of Quartz Hill, Calif. Grandchildren Robert Olsen and wife Jessie of Milford, Conn. Michelle De- Gennaro and husband Joe of Milford, Conn. Kandis Farrell and husband Matthew of Ventura, Calif.
Joseph Smith and wife Brittany of Saugus, Calif. Kenneth Smith of Ventura, Calif. Kaylie Means of Rosamond, Calif; Emily Means of Quartz Hill, Calif; great-grandchildren Aiden Smith of Saugus, Calif. Jacob DeGennaro of Mil- ford, Conn. and his nieces and nephews.
A resident of Quartz Hill, Calif. since 1970. A Veteran of the Army of Occupa- tion Japan, the Korean War and the Vietnam era. Retired after 20 years of service from the United States Air Force, July 31, 1969. Employed by South- ern California Edison for 23 years, retired January 1, 1994. He enjoyed his re- tirement by working at the Jet Hawks stadium for eight seasons. Robert was a member of Our Shepherd Evangelical Lutheran Church (Wisconsin Synod) since 1972.
He was the number one fan of the New York Yankees and looked forward to baseball season every year. He supported Quartz Hill 4-H and Quartz Hill High School FFA by raising livestock with his children and grandchildren. He enjoyed attending the Antelope Valley Fair and watching them show their an- imals. He was a history enthusiast and enjoyed talking to anyone who would listen. He was also very proud of his Norwegian Heritage.
His family was everything to him and he will be deeply missed.
We love you Bobby-O!
Services will be held at Our Shepherd Lutheran Church located on Tuesday, Sept. 21 at 2:00 at 42521 20th St. West, Lancaster Calif. 93536. In Lieu of Flowers, the family wishes memorial contributions be made to Our Shepherd Lutheran Church.
Published by The Antelope Valley Press on Sep. 18, 2021.
To plant trees in memory, please visit the Sympathy Store.
MEMORIAL EVENTS
Sep
21
Service
2:00p.m.
Our Shepherd Lutheran Church
42521 20th St. West, Lancaster, CA
MAKE A DONATION
MEMORIES & CONDOLENCES
1 Entry
I am so sorry to hear of Bob's passing. He was such a good man...I can picture him in the arms of Jesus. A dedicated WELs Lutheran, Bob was a shining example of what a christian man should be, gentle and kind. May the Lord bless and keep his precious family in the days to come, and give them comfort and peace. xox
Rayanne Zapf & Family
September 18, 2021
Showing 1 - 1 of 1 results