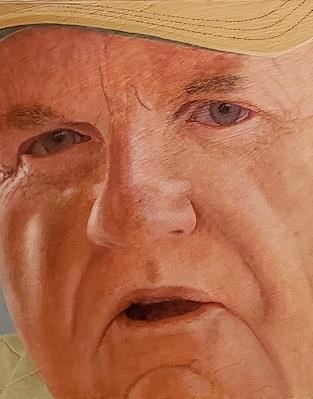 Arizona's Agricuture Artist, Carl Duane Clapp (80), died on July 10, 2021, in Casa Grande, AZ from a short fight with aggressive cancer. Born in Douglas, AZ on August 10, 1940, he was the only son of Chauncey Duane Clapp and Mildred Reed Clapp.

Following graduation from Willcox High School in 1959, Carl spent four years in the US Coast Guard. From there he attended Eastern AZ College in Thatcher, AZ before switching to Arizona State University.

Graduating from ASU, he used his art education degree to teach at Camp Verde High School. 1971 found him farming in Casa Grande for his in-laws, Parke and Elaine Gilbert.

Farming gave him time to pursue his two avocations: golf and art. His work as an ag artist benefitted many-- from Cotton Wives scholarships to the Leukemia Foundation auctions. He spent two years coaching baseball at Camp Verde High School and many years with the Casa Grande Little League.

One of Carl's favorite memories was coaching a baseball team against a friend in a bid for top spot. To build team spirit and camaraderie, Carl had his boys spend the night at his house. During the night, the opponents sneaked around the front of the house toilet papering everything--branches of two mulberry trees, car and pickup, entry and light. Then, they put strategically placed signs to elaborate their hoax. Laughing after taking photos, Carl's team cleaned up the amazing feat, embarrassed that the baseball team had slept through the whole event.