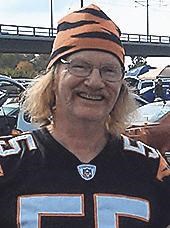 BORN
1954
DIED
2016
FUNERAL HOME
Chapel of the Chimes Mortuary
7924 North 59th Ave
Glendale, AZ
Rhodes, Charles
Charles Allan Rhodes passed away June 28, 2016 in Glendale, Arizona. He was born on September 28, 1954 in Schenectady, N.Y. to Harvey and Alice (Ankers) Rhodes.
Charlie enlisted in the Army, the 82nd Airborne, on August 23, 1976 and was honorably discharged on August 22, 1979. He attended Arizona State University, studying Physics. In the 70's he worked for Village Inn Pizza in Phoenix, eventually becoming the manager. He then moved to Iowa to manage a Village Inn. Jobs then took him to North Carolina, Tucson, after that he joined the Army. Upon his discharge Charlie started driving truck for Air Support, he spent a short time at Pizza Hut and then went back to work for Air Support where he finished his work career. Charlie was preceded in death by his mother Alice, his brother Paul, his step mother Margit Jensen and his dad Harvey just last year. He is survived by his aunt, Maxine Smithberg of Noonan, ND and 11 cousins and many good friends. Charlie will be greatly missed but forever in our hearts. Visitation will be held Thursday July 14, 2016 at 5:00pm and Funeral service Friday July 15, 2016 at 9:00am located at Chapel of the Chimes. Reception to follow with committal service being held at the National Memorial Cemetery at 12:30pm - To send condolences please visit www.chapelofthechimesmortuary.com

Published by The Arizona Republic on Jul. 13, 2016.
To plant trees in memory, please visit the Sympathy Store.
MEMORIAL EVENTS
Jul
14
Visitation
5:00p.m.
AZ
Jul
15
Funeral service
9:00a.m.
Chapel of the Chimes Mortuary
7924 North 59th Ave, Glendale, AZ
Jul
15
Committal
12:30p.m.
National Memorial Cemetery
AZ
Funeral services provided by:
Chapel of the Chimes Mortuary
MAKE A DONATION
MEMORIES & CONDOLENCES
Sponsored by Chapel of the Chimes Mortuary.
4 Entries
thanks to Charlies friends who we were able to connect with through FB, I got to know my cousin much better through their stories and words
Ron Smithberg
July 21, 2016
I'm so sorry to hear about your loss. May your memories comfort your heart; and God help the Rhodes family during this time of sorrow. Isa.41:13
Carla
July 20, 2016
Charlie and I meet in 1968 when his family moved to Arizona. We went to Glendale High together but lost touch shortly thereafter.We reconnected years later. I will miss him. He is in the Lords care.
Keith List
July 17, 2016
My deepest sympathy to Charlie's family & many friends. He was such a bright & funny spirit We went back to high school days & worked together at VI at 16. He was a stand up friend when my husband died in 2007. His loss leaves a deep hole in my life. May he rest in peace, & join his beloved Simi, in heaven. Amen
Vickie Gessner-O'Neil
July 13, 2016
Showing 1 - 4 of 4 results