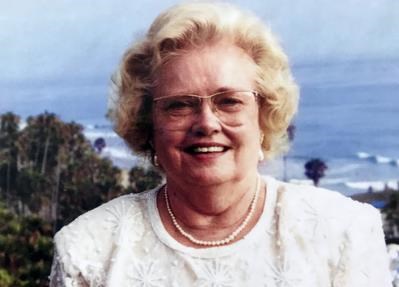 Scottsdale - Dorothy Helen Bernice Hoggatt of Scottsdale, AZ breathed her soul away into her Savior's arms on Tuesday, May 29, 2018. Dorothy was born on April 5, 1928 in Saint Paul, Minnesota. She worked in the employment office for General Mills during the late 1940s to early 1950s at Foshay Tower in Minneapolis, MN. After moving to Phoenix in the early 1950s, she worked for the Chrysler Corporation, where she met her husband, Merle W. (Dutch) Hoggatt, Sr. Dorothy and Dutch were married in 1954 and Dorothy worked as a stay at home mom until 1967. From 1967 to 1987, Dorothy was the church secretary at Camelback Church of Christ. Dorothy is a faithful member of the church of Christ from her baptism in 1961 until now. Dorothy was predeceased by her father (Carl Johnson), mother (Anna Samuelson Johnson) and three brothers, Howard, Elmer (Bubby) and Robert Johnson. Surviving children include three sons, Merle "Dutch" Hoggatt Jr. of Searcy, Arkansas (wife Sharon); James "Jim" Hoggatt of Scottsdale, Arizona (wife Susan); and Robert "Rob" Hoggatt (wife Veronica) of San Clemente, California. Dorothy's grandchildren include Cherisse Gregory (husband Mark), Angela Franz (husband Eric), Haley Hoggatt, Lindsay James (husband Reuben), Darren Hoggatt (wife Heidi), Joseph Hoggatt and Joshua Hoggatt. Dorothy's great grandchildren include Aleksi Gregory, Gavin Gregory, Lorelei Franz, Jack James and Hugo James. Dorothy has one niece, Susan Johnson. The Celebration of Life service will be held at Camelback Church of Christ, 5225 E. Camelback Road, Phoenix, Arizona 85018 on Monday, June 4, 2018 at 10am with a viewing at 9am that same morning. In lieu of flowers, there is a fund established in Dorothy's name to renovate the children's playground area behind the Camelback Church of Christ church building. If you would like to contribute, send checks to Camelback Church of Christ and put in the memo "Children's Playground Equipment in memory of Dorothy" or you can donate online at: camelbackchurchofChrist.org/home/donate/. The phone number for the Camelback Church of Christ office is 602-840-2661.