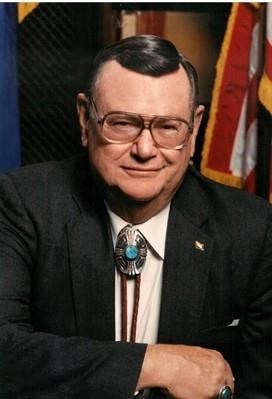 Former State Senator and Maricopa County Treasurer Douglas P. Todd of Tempe passed away peacefully in his Tempe home on May 24, 2019. He was 89 years old.

Doug is survived by his sons, Michael Todd (Jenni) of Newport Beach, CA, Steve Todd (Melissa) of Tempe, and daughters, Christy Kerr (Jerry) of Buckeye, and Shelley Todd of Tempe; his fifteen grandchildren; his twenty four great-grandchildren, and his brother, Marvin Todd (Betsy) of Phoenix. He was preceded in death by his wife of 61 years, Mary Anne (Monie), and by his son, Bradley (Sandi).

Doug was born in Prescott, AZ to Joel and May Ruth Todd in 1929. His mother's family had homesteaded in the Granite Dells near Prescott in the 1870's and he treasured that scenic part of Arizona where he was raised. After graduating from Prescott High School, he attended what was then Arizona State College. There he met Mary Anne Corbell, daughter of Victor and Anna Corbell, of Tempe. When he married Monie in 1949, he decided to learn and become a farmer; eventually graduating as a member of the first class of the School of Agriculture in 1951. In partnership with his father-in-law, they grew cotton, alfalfa and barley on the family farm south of Baseline in Tempe. He and Monie raised their five children on the farm; imbuing them with independence and a drive to work hard and use the gifts they possessed.

When the farmland was sold in the early 1970's, Doug took on new challenges including oversight of the design and construction of the Lakeshore Bible Church of God (on the former farmstead) and the reestablishment of the dormant Maricopa County Fair. His success with the fair lead him to be elected to represent District 27 (Tempe) to the Arizona House of Representatives in 1978, and he later served three terms as State Senator for the same district. In the Arizona State Legislature, where he served for 14 years, he found himself on the appropriation subcommittees that oversaw the funding of the state universities. He strove to achieve fair and equitable solutions for funding parity. These efforts sparked the next level of growth for Arizona universities, especially for ASU, and Doug was named ASU Alumnus of the Year in 1995. He also sponsored the legislation that funded future freeways 101 and 202.

Doug was elected as Maricopa County Treasurer in 1992 and served twelve years. The beginning of his tenure was marked by a severe fiscal crisis for the County, which he skillfully managed, leading Maricopa County to financial health and higher bond ratings.

In addition to his respected political career, Doug was an accomplished tenor, singing in glee club in college and church choirs. He was mentor and counselor to numerous Republican candidates. He restored his grandfather's 1917 Model T Ford, later donating it to the Sharlot Hall Museum in Prescott. He and his late wife, Monie, were life-long members of Lakeshore Bible Church of God. He was also a proud member of Delta Chi fraternity, Tempe Diablos, and the wonderful group of Prescott High graduates of 1944-1950 affectionately known as the "Prescott Mafia", with whom he had life-long friendships.

This past Thanksgiving he presided over a grand gathering of his entire family, reminding all of them of the blessings of his life. Doug will be remembered as a loving father, a patriarch of a pioneer Arizona family, and a leading figure in the community.

His funeral is scheduled for 9:30 AM on Saturday, June 15, 2019 at Dayspring United Methodist Church, 1365 E. Elliot Road, Tempe, AZ 85284. As was Doug's custom, attendees are encouraged to wear a bola tie to the service to honor his memory. Interment will be private. Flowers may be sent to the Church. The family suggests memorial contributions may be sent to Hospice of the Valley, at www.HOV.org.


Published by The Arizona Republic from Jun. 2 to Jun. 9, 2019.
To plant trees in memory, please visit the Sympathy Store.
MEMORIAL EVENTS
Jun
15
Funeral
9:30a.m.
Dayspring United Methodist Church
1365 E. Elliot Road, Tempe, AZ
MAKE A DONATION
MEMORIES & CONDOLENCES
9 Entries
I have wonderful memories of Doug and Monie as we tried to solve some of the world's problems through our association with the Republican party. He served our country well through his service as State Senator and Maricopa Country Treasurer. Working on his political campaigns was fun. May he rest in peace.
Carol Barmore
July 4, 2019
I've known Doug, Monie, and his family since 1961. When I was in 4th grade, he directed the youth choir at Southwest Youth Camp, Wrightwood California, and led us in "I Know A Fount,' and "There is a Quiet Place." I can still see him directing us and showing us how to add expression to lyrics using volume and pauses. I can still hear our little group singing. Those songs will always remind me of him.
Doug was a key, respected part of our congregation at University & Myrtle Avenue, Tempe, in which I am grateful to have spent my formative years. As a little kid, he took time to talk to me, and would put me at ease (though he was the tallest person I knew, ) by asking about my own interests and goals. I felt special around Doug Todd, and as an adult, too. His confidence would rub off.
When the church relocated to Guadalupe at Lakeshore in Tempe, he kept an eye on the day-to-day construction of the new building, and was indispensable in setting up an investment group that later retired the debt.
One Sunday morning my clock radio woke up me up to "Goooood morning. I'm Doug Todd" --that inimitable voice and laugh! It was like he was standing in my room. He was being interviewed on local Phoenix NPR about reviving the Maricopa County Fair.
I know he touched many, many people, and helped change our State. I'm one of them, I won't forget my lifelong friend, Doug.
Keith Huffer
June 14, 2019
It saddens me to hear of the passing of Doug. He and your mom were great family friends and neighbors. His contributions to the community and education were many and continue to benefit the community. He had the ability to light up a room with his gentle grace and fierce humor. Our love you and your family at this difficult time. Terry and Melvin Enriquez (Jerry and Sue Vaughn's daughter)
Terry Enriquez
June 10, 2019
So sorry for your loss. May you have peace and may God comfort your grieving heart.
June 7, 2019
My thoughts and prayers are with his family and friends.

Cynthia Bustamante
The Assessors Office
June 6, 2019
My prayers and thoughts all go out to Dougs family.
It was a pleasure to have known Doug and a distinct honor to have been his friend for some 65 years.
My God give you all the peace to say goodbye!
Uncle Hank Evans
La Jolla Ca
Henry Evans
June 4, 2019
Please accept my sincere condolences for your loss. May fond memories and the love of family and friends comfort you during this difficult time. Jeremiah 29:11.
Kj
June 4, 2019
A postive leader in our community. He truly helped to build a better Arizona. I had the good fortune to word with Doug while with the Retail Grocers Assocation of Arizona
Paul Bennewitz
Friend
June 3, 2019
Todd family, my thoughts are with you at this difficult time. As a new family in the valley in 1962, your family welcomed us, as did the whole church family. I remember with fond memories our days in the youth group. God bless you.
Valdean (Anderson) Shetterly
June 2, 2019
Showing 1 - 9 of 9 results