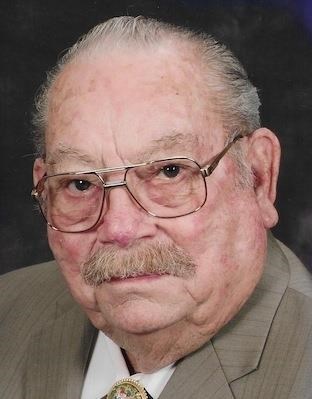 Edward Everett (Ev) Griffin passed away peacefully on Thursday, June 17 at Banner Baywood Hospital in Mesa, Arizona. Everett was born July 23, 1932, in Phoenix. A true native son of Arizona, he lived in Scottsdale, Christopher Creek, Payson, and most recently Apache Junction. He was a devoted husband and father, and a man of deep Christian faith who gave himself generously to his community through work in his church, and the Benevolent and Protective Order of the Elks. Ev was a lifelong supporter of the Boy Scouts of America and it was the great privilege of his life to serve as Ranger for the R-C Scout Ranch near Christopher Creek. Everett is preceded in death by his first wife, Donna Ruth (Blakely) Griffin. He is survived by his wife Joyce, three children, Robert Lee, Donna Kathleen, and James Monroe. Everett was also blessed with many grandchildren, great-grandchildren and great-great grandchildren, who all lovingly called him Grumpa. A celebration of life will be held on August 28, 2021 at 10AM at Apache Junction First Baptist Church, where Everett served as a deacon. A luncheon will follow. Memorial donations may be made to Sunshine Acres, 3405 N. Higley Road, Mesa 85215 or by calling 480-832-2540.


Published by The Arizona Republic from Jul. 17 to Jul. 20, 2021.
To plant trees in memory, please visit the Sympathy Store.
MEMORIAL EVENTS
Aug
28
Celebration of Life
10:00a.m.
Apache Junction First Baptist Church
AZ
MAKE A DONATION
MEMORIES & CONDOLENCES
2 Entries
I was privileged to have worked with Ev. As a Scout leader, it was always fun to come to R-C Scout Camp. When we would arrive, Ev always wanted to meet with our boy leaders to explain the rules for "their" camp and how to treat it. And then before we left each time he would go around with them to be sure that it was as good or better than when we got there. Ev was also a volunteer member of the Cristopher Creek Fire Dept. and served as an EMT. He touched thousands of lives and we are better for his help, guidance and knowledge.
Dave Hall
July 20, 2021
We are sorry to hear of Ev's passing. We knew him thru Boy Scouts. We worked at Geronimo for many years, he was on adult leadership with a Troop going to National Jamboree with one of our boys and when we moved to payson 20 years ago we made contact again. Ev was a good guy and we love him. May his family be comforted at this time knowing you will see him again. Jimmie and Barbara James
Jimmie & Barbara James
Other
July 19, 2021
Showing 1 - 2 of 2 results