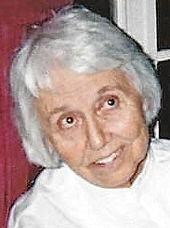 Stover, Elizabeth "Liz" Alma
The Honorable Elizabeth "Liz" Stover, retired Maricopa County Superior Court Judge, died on October 11, 2014 in Tucson, Arizona, at the age of 88. Born April 15, 1926 in Deming, New Mexico to Bertha and Nimrod Henry Stover, she loved to tell stories of her father as a telegrapher for the Southern Pacific Railroad and of her mother as a teacher in a one-room school house. Elizabeth graduated from ASU in Tempe, and went on to be one of the few women to graduate early on from the U of A Law School. She was admitted to the Arizona Bar in 1954. While practicing law in Phoenix she ran for Arizona Attorney General in 1970. Active in the Greater Phoenix Council for Civic Unity, she fought to end segregation in Arizona during the civil rights era. Elizabeth was sworn in as a Maricopa County Superior Court Judge in 1980, serving until 1996 when she retired. After retirement she was honored for her years of providing pro-bono legal work, receiving the "For the Love of Justice" award in 2006 from the Volunteer Lawyers Association. Elizabeth was an avid gardener, baseball fan, opera and jazz enthusiast and movie buff, having collected countless vintage and contemporary films and records. Elizabeth will be remembered as an inspirational and caring mentor in her family. "You will live on in our hearts with love, forever and ever." Elizabeth is survived by her son David Stover, daughter Rachel Stover, son-in-law William Barg, and her three grandchildren of Tucson. She is also survived by five nieces; Betsy (Rob) Rotondo, Marguerite (Cesar) Hinojosa, Katie (Roberto) Moreno, Mary (Scott) Shepherd of Phoenix and niece Edie (Jessie) Farias of Maine. Her family includes eight grandnieces and grandnephews. Elizabeth is preceded in death by her daughter Amy Stover-George, sister Clara Jordan, and brother Edward Stover. A Celebration of Life Service will be held on November 22, 2014, 11:00 AM, at the Unitarian Universalist Church, 4027 E. Lincoln Drive, Paradise Valley, Arizona with reception to follow. In lieu of flowers, friends may choose to donate to one of the many charities which she supported: Shriners Hospitals for Children, Children International, Lupus Foundation of America, Project Hope, Doctors without Borders, Habitat for Humanity, The Humane Society of Southern Arizona and Ironwood Pig Sanctuary. Condolences can be sent to: Rachel and David Stover 3849 E. Broadway Blvd., #182, Tucson, AZ 85716.


To plant trees in memory, please visit our Sympathy Store.
Published by The Arizona Republic on Nov. 9, 2014.
MEMORIAL EVENTS
No memorial events are currently scheduled.
To offer your sympathy during this difficult time, you can now have memorial trees planted in a National Forest in memory of your loved one.
MAKE A DONATION
Please consider a donation as requested by the family.
MEMORIES & CONDOLENCES
10 Entries
Judge Stover ..so compassionate...so just...a true humanitarian..

She added so much to the Superior Court bench in this County..

RIP
Bernard Dougherty
November 22, 2014
The passing of Judge Stover brings much sadness. I worked as a court clerk for her and ultimately became her judicial assistant. She was not just a boss but became a true friend. She was the most most compassionate person I have ever known. Her presence in my life has left me amazing memories. The world lost a wonderful woman that I was proud to have known and kept ties with. Sincerest condolences to her loved ones. She will be missed but never forgotten!
Connie Ramirez
November 21, 2014
I was one of her court reporters, for about four years. I remember her work ethic, her love of films/movies, her love of animals. I was a huge movie buff also & she used to make me tell her the plot lines of movies I'd seen, even how they ended & then she'd go see them anyway, knowing how they turned out! I was always amused by that. She loved her children more than any of the above loves - my thoughts & prayers are with her family.
Tara Kramer
November 14, 2014
I also met Judge Stover in 1989 when she hired me as a reporter. She was my first judge and she taught me so many things. When she retired, I lost a great boss. She was a woman I admired not only because she accomplished so much at a time when it was difficult for women to succeed, but most importantly I admired her for the caring, compassionate, down to earth way she lived her life. My deepest condolences to her family.
Terry Masciola
November 12, 2014
I did not meet Judge Stover until 1989, when I had the good fortune to be appointed to the superior court bench in Maricopa County. I found "Liz" to be a terrific colleague and a warm and genuine human being. Even after she retired we would occasionally run into each other at the credit union or elsewhere. She always remembered my fondness for music in general and the trumpet in particular. What a delightful lady. I am so glad I had the chance to know her, and I hope her family will accept my condolences in her passing.
Dave Cole
November 12, 2014
Our Thoughts and Prayers are with you and your family!!
Sharon and Joe Beaty
November 10, 2014
I worked at the Maricopa County Superior Court many years ago and Judge Stover was one of the nicest judges I have ever met. She is the one that taught me to give to others of yourself and you will be a happy person. She was right. Thank you for everything Judge Stover.
Janice Titgen
November 10, 2014
My sincere wishes to Judge Stover's children, David and Rachel, and the rest of her family during this time. I was one of her Court Clerks and spent lots of time with her at work, once even until 11:00 p.m., in a hearing, and during the ride home she gave me since the buses had stopped running that late. Tired as I was, I am sure I would only stay that late for Judge Stover. I will miss her. Sometimes, Judge Stover and I would go to Park Central for lunch and to a small store there to look for Molas. We always made it back to work though on time. I hope you will all be well during this time. I know what you are all going through as I lost my Mother five months ago. I will miss Judge Stover and listening to her stories. Lynne Chapman
Lynne Chapman
November 10, 2014
My deepest sympathy to Judge Stover's family and friends. I was an attorney with Community Legal Services for five of Judge Stover's years on the bench and she was on my list of judges who would be willing to consider granting temporary restraining orders where justice required her kind and fair intervention. I remember one late Friday afternoon when I called for her help and she ordered a landlord to replace a door he had removed at 5 pm that cold Friday, hoping to force my client, a Glendale mother and her small children to leave their home without proper legal notice. Judge Stover called me on Friday evening to make sure the door had been restored per her TRO. This was not an unusual occurrence for Judge Stover and I will always remember her.
Patrick Schiffer
November 9, 2014
Thank you, Judge Stover. You will long be remembered as a trailblazer for women in the law in Arizona.
Mary Miller
November 9, 2014
Showing 1 - 10 of 10 results