Published by The Arizona Republic on Sep. 16, 2012.
To plant trees in memory, please visit the Sympathy Store.
MEMORIAL EVENTS
To offer your sympathy during this difficult time, you can now have memorial trees planted in a National Forest in memory of your loved one.
MAKE A DONATION
MEMORIES & CONDOLENCES
11 Entries 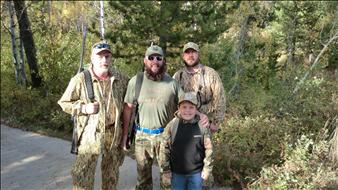 Hal was my hunting mentor, my brother and my friend. So many times we talked about the beauty and splendor of the creation our Lord and Savior created for us. I will miss him greatly and his influence in my life.
Carl Butler
September 23, 2012
I remember when he spoke one Sunday at church. He loved to hike the trails and he said he would take his children and show them the trails made by those who have gone before paving the way for them. It was important that his children knew of their ancestors. His love of his family, friends and the beauty of God's wilderness will be something I will always remember him by. God will bless you Debbie and also your sons and daughters in the most wonderful ways. Trust in Him and He will make your pathway bright and beautiful.
Bonnie Staley
September 21, 2012
My deep sympathies to you and your family Debbie. I always enjoyed being around Hal. He was always so thoughtful of others. Remember the car you gave us. We had many happy memories driving our family in it and spreading our own kind of joy to others.
It has been a rough few years. I know that your family will see him again. I often think of our own reunion with my husband and family. I hope that you will rember the good times. I know that God has a plan for us. I certainly wonder sometimes what it is. I am learning how he blesses us in our lives each and every day. Each trial seems to make us stronger. I hope that you are able to help your children always have the Spirit of the Holy ghost to be with you. Life is definitely a journey. Love Kathryn Henrie
Kathryn Henrie
September 20, 2012
A great brother that taught me to stick up for myself as a kid and how to stand for truth as an adult. Hal's legacy is the example he lived every day and the beautiful, young family he left behind. May all who are able support his children's future by donating to the Fish Children's Fund, Desert Schools FCU, P.O. Box 2942, Phoenix, AZ 85062.
September 20, 2012
Dear Friends and Family Members:

It was my pleasure to meet Hal many years ago while we worked on the same graveyard-shift janitorial crew at Brigham Young University. We enjoyed a wonderful association for more than two years as we worked our way through college.

Unfortunately, our paths parted after I graduated and as we pursued different careers, got married and began raising families. A couple of years ago, it was my pleasure to become reacquainted with Hal and to meet his lovely wife, Debora, while I was on the job as a reporter with the West Valley View newspaper in Avondale, Arizona.

It didn't take long to get caught up on the missing years and to discover that we lived less than three miles from each other in northwest Phoenix. We last saw Hal about a year ago at a wedding reception for his eldest daughter. My wife and I mourn the passing of Hal and know that he will be deeply missed. He was a kind, thoughtful and remarkable man. God be with us 'til we meet again!

-- Brent and Janet Whiting, Phoenix
September 18, 2012
Hal taught me many valuable life lessons when he was a youth leader in our church. He was a man of great faith and courage and I'll always be grateful for the time he sacrificed to take us on youth trips and teach us martial arts. He will be missed and forever remembered.
Vince Trim
September 18, 2012
We have very fond memories of Hal. He was our home teacher for years and faithfully took care of Don and I. His example spans the universe. He will be remembered by us and countless others as he joins the union of our Heavenly Father. Our sincere and heartfelt wishes go out to Debora and children. Debora we have fond memories of you as well. We loved your wedding to Hal. So sad that we lost contact and then to find out here. How sad! We love you so very much. Love, Don and Karen Brown
Karen Brown
September 18, 2012
Harold was in my spanish class in high school. I didn't know him well but I always liked him and felt he was a good person. My son went to Tolleson High School and was in Harold's spanish class. My son also had good things to say about Harold.
Estella Moreno Young
September 18, 2012
Had great times with Hal during our family hunting trips, he will be deeply missed and may his family feel his loving arms around them during this time.
Linda Strawn
September 17, 2012
I have fond memories of Hal being so patient with all of us little kids at our Family Reunions when we were growing up. I was also touched by his loving care of Grandma Irene in her final months. Miss you Hal!
Ruthe Elaine Case
September 16, 2012
Mr Fish will always be remembered by his students. God bless his family during their time of loss.
Beverly Orsborn
September 16, 2012
Showing 1 - 11 of 11 results