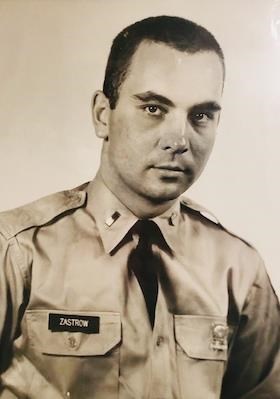 Phoenix - On August 10, 2020, the Honorable John T. Zastrow peacefully adjourned to the heavens at 82 years of age. John lived in Phoenix, Arizona, where he is survived by his wife Christel, his son Stephen, his daughter-in-law Julia (Steve's wife), and his three grandchildren, Alexandra, Ivy, and Van - all of whom will miss him very much.

John was born in Wausau, Wisconsin, on December 2, 1937. The son of a Navy serviceman, John and his family moved from place to place during his youth. Eventually, he would make his way to California where he earned a bachelor's degree in Political Science and a master's degree in Public Administration both from the University of California at Los Angeles. John was the first member of his family to attend college and a fervent believer in the importance of education. After moving to Arizona, he went on to earn a Doctor of Jurisprudence from Arizona State University College of Law.

A lifelong public servant, John began his career in the military serving to the rank of 1st lieutenant. He later became Assistant Director of the League of Arizona Cities and Towns and an Assistant City Attorney with the City of Scottsdale. He was first appointed to the bench as a City Court Judge in Phoenix and later a Maricopa County Superior Court Judge pro tem. In 1982, John was again appointed to the bench, this time as a United States Immigration Judge in the Department of Justice where he served his country for more than 20 years.

In his retirement, John lead a quiet private life. He could most often be found in his favorite chair with a book in one hand and the TV remote in the other. Still, John loved to travel with his wife, Christel. In fact, they would venture to the beaches of Acapulco every spring for as long as he was able to do so. And even when it became difficult for John to leave the house, he enjoyed visiting his grandchildren and fruitlessly debating politics with his son at family dinners.

Published by The Arizona Republic from Aug. 21 to Aug. 23, 2020.
To plant trees in memory, please visit the Sympathy Store.
MEMORIAL EVENTS
To offer your sympathy during this difficult time, you can now have memorial trees planted in a National Forest in memory of your loved one.
MAKE A DONATION
MEMORIES & CONDOLENCES
3 Entries
One year has gone by since John passed away. I have and will forever miss the annual trips to Puerto Vallarta with John, Christel, Pike and myself. We also traveled to Cabo San Lucas, Maui and the CLE conferences in Coronado CA every July. I miss John's friendship, intelligence, interesting stories and sense of humor. I hope he and Pike are enjoying their daily get togethers in some capacity. I will miss both of them forever! With love, Connie
Connie Kolden-Johnson
Friend
August 10, 2021
John and his family were good friends of our family for many years. He was always an interesting person to converse with. I wish Crystal and the family heart felt condolences. I missed the gatherings at my parents house and the nice dinners we all shared. Bless you all. Mike and Lois McCort.
michael mccort
Friend
November 1, 2020
I tried cases before the Honorable John T Zastrow for more than 15 years as an INS attorney in more than 10 locations in Arizona and Nevada. We would spend a week at a time in such places as Winslow, Arizona. He ran a strict and professional Court where you knew you would get a fair, well reasoned decision. His rye sense of humor and quick wit made the time pass. The last time we were together in his office in Eloy (along with IJ Thomas "Tommy" O'Leary) we laughed and reminisced about the many humorous episodes we had shared over the past years. He was a good man and a better friend. Rest In Peace Judge.
Thomas E. Walter
Friend
September 23, 2020
Showing 1 - 3 of 3 results