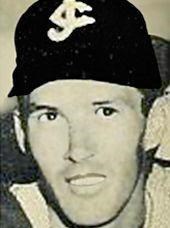 Layton, Lester Lee
aged 92, of Scottsdale, Arizona, a retired aircraft planner died on March 1, 2014. He was born in Nardin, Oklahoma on November 18, 1921. He attended the University of Oklahoma, was a Navy veteran and had a professional baseball career spanning eleven seasons. In 1958, he was inducted into the Kansas Baseball Hall of Fame. Lester began his pro-baseball career in 1944 with the New York Giants "Triple A" Farm Club, the Jersey City Giants. After serving in the Navy, he continued his baseball career with the Jersey City Giants and, in 1947, the team won the International League championship. In 1948, he played for the New York Giants and had the rare distinction of hitting a homerun his first time at bat on May 21, 1948. In 1949, he returned to the minor leagues where he played for six more seasons including the American Association League for Minnesota and two years for the Los Angeles Angels in the Pacific Coast League. In 1954 and 1955, he played for the Wichita Boeing Bombers. Lester was a wonderful person, always wore a smile and will be missed by everyone who knew him especially his daughter. Survivors include his daughter Linda L. Layton of Lakeway, Texas and a sister, Barbara Williams of McPherson, Kansas. No services are planned. Please make a donation to your local Alzheimer's Association.

Published by The Arizona Republic on Mar. 9, 2014.
To plant trees in memory, please visit the Sympathy Store.
MEMORIAL EVENTS
To offer your sympathy during this difficult time, you can now have memorial trees planted in a National Forest in memory of your loved one.
MAKE A DONATION
Please consider a donation as requested by the family.
MEMORIES & CONDOLENCES
3 Entries
YES LES HIT A PINCH HIT HOMERUN DURING HIS FIRST BIG LEAGUE AT BAT. LES THEN HAD BASEHITS DURING HIS NEXT THREE AT BATS. A TRIPLE AGAINST KENT PETERSON, A DOUBLE AGAINST TINY BONHAM AND THE LAST HIT WAS A SINGLE OFF RUSS MEYER, SO LAYTON HIT FOR THE CYCLE DURING HIS FIRST FOUR BIG LEAGUE AT BATS. LES IS THE ONLY ONE TO HAVE DONE THAT.I CONTACTED LES IN 1987.
BARRY MCMAHON
March 12, 2014
Fair winds and following seas sailor.