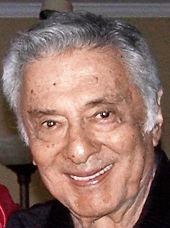 FUNERAL HOME
Messinger Mortuaries
7601 E. Indian School Road
Scottsdale, AZ
Miller, Murray
long time resident of Phoenix, passed away on December 11, 2013, at the age of 86. Murray was born September 15, 1927 in Brooklyn, NY, the son of Russian immigrants Harry Miller and Rose (Nierenstein) Miller. He enlisted in the armed forces at age 18, and received his bachelor's degree from the University of New Mexico in 1951. That same year he met the love of his life, Zelda (Cohen) Miller, daughter of Israel Cohen and Esther (Loshak) Cohen, at a Hadassah social tea. They were married four months later. After working as a medical equipment sales-person, Murray attended the University of Arizona law school and graduated in 1958. He began his legal career in 1958, and through the years handled several high profile cases both in Maricopa County and elsewhere in the Southwest. In 2002, Murray scaled back his practice of law as he assumed the care of his ailing wife, providing her comfort until her death in 2008. Regarded as tenacious and theatrical in the courtroom, Murray was sweet and deeply sensitive in his private life. He will be missed by many. He is survived by his sons Mark, Richard (wife Marcia), and Robert (wife Brit), and by his grandchildren Sarah, Rebecca, Daniel, Emery, and Hudson. A private service will be held at the National Cemetery; donations to Hospice of the Valley, the agency that cared for Murray's wife, are welcomed (1510 East Flower, Phoenix, 85014). Arrangements entrusted to Messinger Indian School Mortuary.

Published by The Arizona Republic on Dec. 15, 2013.
To plant trees in memory, please visit the Sympathy Store.
MEMORIAL EVENTS
To offer your sympathy during this difficult time, you can now have memorial trees planted in a National Forest in memory of your loved one.
Funeral services provided by:
Messinger Mortuaries
MAKE A DONATION
MEMORIES & CONDOLENCES
1 Entry
My heart goes out to the Miller family. I have the privilege of working with Mark Miller, one of the sons of Mr. Miller. Blessings to all of the Millers. Susie Hicks
December 16, 2013
Showing 1 - 1 of 1 results