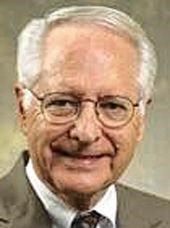 Segal, Richard A.
Loving Husband and Father and A Lawyer's Lawyer. Richard A. ("Dick") Segal, an attorney at Gust Rosenfeld, PLC for 55 years, passed away suddenly on April 18, 2014. Dick graduated in six years from the University of Arizona with a BA and LLB. After graduating from law school, he served as a United States Army Judge Advocate General (JAG) officer in Berlin, Germany from 1956 to 1959. Dick spent his entire civilian legal career at Gust Rosenfeld, serving as a member of the firm's Executive Committee for many years. Dick tried more than 120 cases to verdict and was counsel of record in dozens of reported appellate decisions. He was President of both the Maricopa County Bar Association and the State Bar of Arizona, a fellow in the American College of Trial Attorneys, and a member of the Byron McCormick Society of the University of Arizona Law School. Dick liked to downplay his professional achievements, describing his career by saying, "I showed up and they just kept paying me." In fact, he quickly developed a national reputation for excellence in the areas of commercial, insurance and anti-trust litigation. His approach to the law earned him the admiration of clients, judges and fellow attorneys, all of whom lauded his knowledge of the law and his personal and professional integrity. Characteristically, Dick professed to a much simpler approach. In his words, he built his practice by "doing the work on time, at a fair price and winning more than your share (of cases)." Even after he stepped down from his management role at Gust Rosenfeld last year, Dick was often sought by others in the firm on legal questions "just to make sure." His door was always open to anyone who sought his wise counsel or who wanted to talk about his many travels with his wife around the world, national and world politics, the Tour de France, his children's accomplishments, or a good meal at a new restaurant. A dry wit, Dick loved a good joke, but he always told his children never to laugh at their own jokes. He instilled in them the highest moral values and taught his children many things about being a good, wise, and compassionate person and citizen. Above all, he told them to be a mensch. Dick was active in Democratic politics and civic organizations. He loved to watch the renaissance of downtown Phoenix, and he served as an officer and legal counsel to the Phoenix Community Alliance, a group dedicated to revitalizing downtown Phoenix. His office overlooked US Airways Center and Chase Field--venues derived in part from his downtown development efforts. He was also a judge pro tem and served on innumerable bar committees and panels, including the Arizona State Bar Probable Cause Committee. He fought for social consciousness and justice throughout his life. Dick was well known for his brevity and economy with both the written and spoken word. He abhorred footnotes, and often returned drafts of briefs he reviewed for other attorneys that were filled with red-line editing, reducing paragraphs into one line sentences. He did not suffer fools. Dick was a lawyer's lawyer who loved the practice of law and the camaraderie of other attorneys. Thus, it was fitting that he spent his last conscious moment sitting at counsel table in a courtroom, surrounded by lawyers and court staff who knew and respected him. Dick's legal and community achievements are surpassed only by his devotion to and pride in his family. He adored his wife of thirty-five years, Susan Plimpton Segal, a partner in every sense of the word. He is survived by his wife, Susan, his two daughters, Lisa Sullivan (Shawn) of Scottsdale, and Amy Segal of New York City; and his son, Lt. Noah Segal of Carlisle, Pennsylvania. He is also survived by his granddaughter, Shana Sullivan of Scottsdale. A memorial service will be held at 1:00 pm on Sunday, May 18, 2014 at the Paradise Valley Country Club. In remembrance of Dick, contributions may be made to the Arizona Theater Company, 222 E. Monroe St. #12, Phoenix, Arizona 85004; Cutler Plotkin Jewish Heritage Center, 122 E. Culver St., Phoenix, Arizona 85004; Temple Solel, 6805 E. McDonald Drive Paradise Valley, Arizona 85253, or Dickinson College, 28 North College St., Carlisle, Pennsylvania, 17013. These organizations represent Dick's commitments to his community, his values, and educational excellence. This abbreviated resume of Dick Segal's lifetime of accomplishments does not begin to describe Dick as a husband, father, grandfather, scholar, attorney, and proud American. But it is true to the spirit of this man. Above all, Dick Segal would want this to be brief. Dick loved his country, his profession and, most of all, his wife and children. He was a one-of-a-kind person and he will be sorely missed. Some say that a person does not really die until the last person who knew him is gone, too. If that is true, Dick Segal will live on for a very long time.

Published by The Arizona Republic on Apr. 23, 2014.
To plant trees in memory, please visit our Sympathy Store.
MEMORIAL EVENTS
To offer your sympathy during this difficult time, you can now have memorial trees planted in a National Forest in memory of your loved one.
MAKE A DONATION
MEMORIES & CONDOLENCES
5 Entries
Dick will never leave my memory bank . He was one great attorney who was also a good friend. He had a great sense of humor....a rare quality in the legal field. I still miss him.......Frank Parks
Frank Parks
Friend
April 17, 2021
What a wonderful remembrance of a life well lived. My love goes out to the entire family!
Susie Danesi
Susie Danesi
April 26, 2014
A consummate professional, a great trial attorney and a human being for whom I had the utmost respect. I had the privilege of trying a case against Dick when I was just a pup in 1986 and it was an invaluable learning experience. The legal community will miss you. Rest in peace.
Tod Schleier
April 23, 2014
I knew Dick from when he first arrived in Phoenix. We were still in elementary school and became good friends. The wonderful attributes he showed as an adult were already present when he was young. He was an outstanding person.
Fred Mendelsohn
April 23, 2014
In one's graying years we often think of people with whom we wish we had spent more time. Dick was such a person. What a lawyer /gentleman he was. During the 40 plus years that I knew him it was always uplifting to have a legal case with him. I'll miss you Dick. My condolences Susan….Frank Parks
Frank Parks
April 23, 2014
Showing 1 - 5 of 5 results