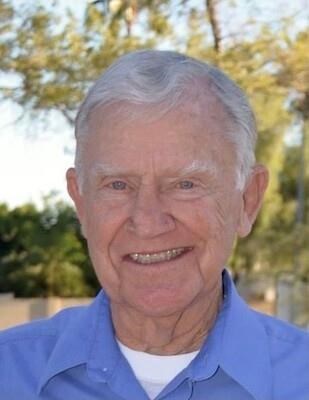 Robert Duane Padelford passed away on January 30, 2021 at his home surrounded by family. Born April 27, 1930 to John Carlton Padelford Sr. and Hilda Madsen of Peoria Arizona, Bob was raised on a ranch near Peoria where his parents homesteaded. He graduated from Peoria High and then attended Arizona State University where he played football, basketball and baseball. He also proudly served his country in the Korean War as a Naval officer.

After completing his bachelor's degree, he and his wife, Phyllis, raised their young family of four children. Early in the life of this family, Phyllis lost a battle with cancer. Later, Bob married Barbara and during their long marriage, they added four more boys to the family.

More than anything else, his Christian faith was at the forefront of everything he did, and Bob will be remembered for his love of people, his sense of humor and his commitment to God. He loved to joke and tease and had a playful smile that spoke love louder than any words he could say.

The family is grateful to all who generously donated towards care and funeral expenses, and they look forward to gathering and remembering Bob with everyone. A celebration of life for all of Bob's friends and family will be scheduled later in the fall.


Published by The Arizona Republic from Feb. 8 to Feb. 12, 2021.
To plant trees in memory, please visit the Sympathy Store.
MEMORIAL EVENTS
To offer your sympathy during this difficult time, you can now have memorial trees planted in a National Forest in memory of your loved one.
MAKE A DONATION
MEMORIES & CONDOLENCES
1 Entry
Bob’s smile, bright blue smiling eyes and his generous heart will be deeply missed. I think I loved his silly songs the most. May all who loved him be comforted and their pain of loss eased.
Kami Pastis
February 11, 2021
Showing 1 - 1 of 1 results