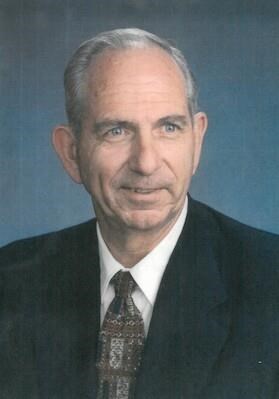 Phoenix - On May 28th 2021, surrounded by his loving family, Robert (Bob) J. Willcoxson passed from this life to his everlasting life in the presence of our Lord. His faith was strong, but quiet. He served faithfully as long as he physically could, and in that moment he was surely greeted in heaven with 'Well done My good and faithful servant.' Born in Sherman Texas on August 26 1935, to Charlie and Bessie Willcoxson, Bob and family soon moved to San Diego California where he attended school and College. Bob was a gifted athlete playing football and running track in high school and later was a tight-end at Cal Poly University. Bob earned his PE certification in Mechanical and Electrical Engineering, an accomplishment only achieved by three others in the state at that time! Bob eventually joined with two other men and built a successful engineering company in Phoenix, Lowry, Sorensen, Willcoxson Engineering. Most notable of his projects are Good Samaritan hospital, Sky Harbor International Airport as well as multiple other commercial projects in other states and Internationally. His legacy of integrity, intelligence, personability and character lives on in the engineering community and with anyone with whom he worked. Also in those early years, Bob joined the Airforce Reserve Unit and served his country for six years. He met and married the love of his life, Judy and started a family. As a role model for his family, Bob instilled the value of hard work, the value of family and displayed a quiet humble nature. Never one to boast, he taught that your actions speak louder than your words. He led by example the value of kindness and genuine interest in others, making him someone many people sought out for advice and direction; he always knew the right thing to do or say. Bob was also known as GBob to his eleven grandkids and great grandkids. He loved taking them to Disneyland or the boat, the beach house, on cruises or just playing with them in the pool where the legendary Fred the Fish lives (and to this day, still can't be found!). Amazing memories were made during those trips and during time spent with him at home. Bob especially loved watching his kids and grandkids play sports and would attend every possible game he could, instilling the value of sportsmanship, dedication to excellence and support for family. In fact, Bob's love for sports began early on and continued until the present day. Before he had kids, Bob coached little league teams and in 1966, he helped two other men start youth hockey here in the Valley. His company sponsored many teams throughout the years and hockey became near and dear to his heart. Hockey was the main sport played in the Willcoxson household, with the exception of his daughter Laura. He would spend hours in the heat watching her cross-country races, track meets, softball games and quarter horse shows. Regardless of the sport or his schedule, Bob always made time for his family. Along with being remembered as a successful business man, role model, caring family man and beloved GBob, many can attest to his quick wit and great sense of humor, love of fun and adventure, the ocean and boating. One of his greatest pleasures was jumping in his truck and heading over to San Diego with Judy (stopping at Mc Donald's for breakfast first of course) and hanging out on his boat. Many notorious activities took place there; the Marriott is still trying to figure out how he managed to sneak into so many of their private parties! There are so many stories and memories of this wonderful man and his life well lived. Stories and lessons that will be talked about for days, weeks, years and generations to come. Bob will be missed but his legacy will live on in his family and with everyone he knew. Bob is preceded in death by his parents, Charlie and Bessie Willcoxson. He is survived by his wife of 63 years, Judy. His children, Bob Jr. Laura, Mike and spouse Janie, David and spouse Yvonne. His grandchildren Kaley, Alex, Stevie, Joe, Hannah, Lauren, Ben, Kate and Cole. His great-grandchildren, Rylee and Brynlee. Services to celebrate this life well lived will be held on Saturday June 12th at 10am at Living Streams Church on Central and Glendale. A short reception will follow. In lieu of flowers please consider donating to Hospice of the Valley/Ryan House. I have fought the good fight, I have finished the race, I have kept the faith. Now there is in store for me the crown of righteousness, which the Lord, the righteous Judge, will award to me on that day- 2 Timothy 4:7-8

To plant trees in memory, please visit our Sympathy Store.
Published by The Arizona Republic from Jun. 4 to Jun. 9, 2021.
MEMORIAL EVENTS
Jun
12
Celebration of Life
10:00a.m.
Living Streams Church
Central and Glendale
Funeral services provided by:
A.L. Moore-Grimshaw Mortuaries Bethany Chapel
MAKE A DONATION
MEMORIES & CONDOLENCES
Sponsored by A.L. Moore-Grimshaw Mortuaries Bethany Chapel.
4 Entries
I am so very sorry to hear this, Mr. Willcoxson is a great man. My condolences go out to this amazing family.
Patty Briody
Acquaintance
June 14, 2021
Condolences to Mrs. W and the whole family. God bless
Kevin McCullough
June 12, 2021
Judy! David and I are so sorry for your loss. Bob meant a great deal to me and I have always remembered him with fond memories, especially coaching our girls softball team and the laughs were just out of this world. He was and always will be my favorite boss EVER!. Please know our prayers are with you and your lovely family. We miss you all. Love Georgia and David Stoppenbrink
Georgia Stoppenbrink
Friend
June 10, 2021
As the days and weeks pass, and as you return to life's routine, may you continue to feel comforted by the love and support of family and friends.
June 8, 2021