The Giants announced that the one-time head coach of the New England Patriots and the long-time NFL offensive coordinator died in Boca Raton, Fla. on Wednesday morning.

"Ron was a wonderful man and a great coach," Giants chief executive John Mara said. "He was a big part of our success in the 1980s and was an important contributor to our first two Super Bowl championships."

Erhardt was hired by Ray Perkins as the Giants offensive coordinator in 1982, about a month after being released by the Patriots. When Perkins left later that season for the University of Alabama, Parcells was named the coach and kept Erhardt, who he had worked with in New England in 1980.

During Erhardt's eight seasons as offensive coordinator, the Giants reached the playoffs five times, won three NFC East titles and two Super Bowls. Phil Simms was the quarterback for the first one over Denver after the 1986 season, and Jeff Hostetler ran the team en route to the second title after Simms broke his left foot late in the 1990 season.

"I learned an awful lot from him. He went on and did some amazing things offensively," Hostetler said. "What amazes me, is that system is still out there, still being used, and works as successfully as ever. It is - without a doubt, out of all the systems I've been involved with and that's probably five, six, or seven different systems - the most simple as far as verbiage, and most consistent."

Current Giants coach Tom Coughlin, who was the team's receivers coach from 1988-90, said he recently sent Erhardt a note when he celebrated his Feb. 27 birthday.

"He was a great guy to work with. He was a lot of fun," Coughlin said. "He kept things pretty loose. He was good on the field. We had some good football players here, so we were pretty succ essful. But I think the working relationship is the thing I remember the most."

Under Erhardt, the Giants consistently had one of the NFL's most productive rushing attacks. Joe Morris rushed for more than 1,000 yards three times, including 1,516 in the Giants' first Super Bowl season. The Giants also finished in the Top 10 in the league in passing in 1984, '85 and '87.

Erhardt entered the NFL as the Patriots backfield coach in 1973. He held that position for four seasons before being promoted to offensive coordinator. Erhardt was New England's head coach from 1979-81, compiling a record of 21-27.


Copyright © 2012 The Associated Press. All rights reserved. This material may not be published, broadcast, rewritten, or redistributed.
Published by The Arizona Republic on Mar. 22, 2012.
MAKE A DONATION
MEMORIES & CONDOLENCES
21 Entries
I was a basketball coach at Mott N.D. when I first met Ron. He scouted our b.b. team in the winters.After every game he would come up to me and say is that all your goingto do.I guess he didn't have enough info..ON HIS CLIPBOARD. Just being around him I learned things about being a coach. The best football coach I ever met. A good friend and a great guy.
Jim Mcpherson
Friend
April 7, 2019
Heart felt sympathies to the family.
Ron and I were in the same OCS class at Ft Sill, Ok. (R2-59)
Robert McGowan
March 8, 2018
Condolences, grew up near you in Fargo
Clark Erickson
February 2, 2013
Ron was a gifted athlete with a great personality and friendly. He will be missed. I knew him from Mandan.
Bob Ulmer
December 29, 2012
Anita .. During my many years at WDAY-TV I had occasion to cross paths with Ron many times, and especially remember him referring to daughter Sandra as "motor-mouth" .. Please accept my genuine and sincere sympathy. I truly share your grief ... Pass these feeling along to Jan.
Don Ford
April 20, 2012
Anita & Family,
We just learned of Ron's passing. He will sorely be missed, what a wonderful man. He was an inspiration to all of us.
God Bless!
Ed & Sonja Pollard
March 31, 2012 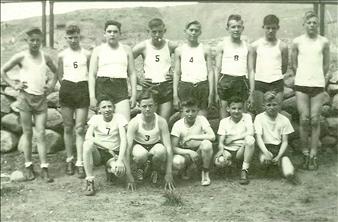 Anita & family. We are sorry to hear about Ron's death but know he is now in good hands in heaven where you will once again meet him. God Bless him!!
I remember Ron in our younger years at St. Joe's Grade school & Mandan, ND High School. We played a lot of basketball on the
school grounds & as in football he was also great in basketball. Those are some great memories of our younger years. God bless you & family.
Dick & Ruth Doll-Las Cruces, NM
Dick Doll
March 30, 2012
Anita, Steve and I are so saddened by Ron's passing. We came to know him as a great neighbor and friend. We didn't know him during his career as a coach but we all knew him as coach. I hope you will continue to be our friend and neighbor and know we are here for you. At least you have the knowledge that is not in anymore pain. He was a good person and was a great condo president. He ran the association like a team. He will be greatly missed. Our condolences go out to you and your family. Hugs, Dawna
Dawna Lee Ursillo
March 30, 2012
Mark Sanchez
March 25, 2012
Anita, On behalf of Hannah, Myself, my sister and brother in law, my sincere condolences are extended to you and the entire family. I will always cherish the time of knowing Ron from when he would come to the Orange Bowl as a visiting coach with the Patriots to the fun times we all had together when he was with the Steelers. Ron was a class guy, had a great personality and was truly a fun guy to be around. He was friend in good time snd not so good times. I learned a lot from him about life. He was much more than just a football coach. He was a great communicator and a wonderful teacher too. Best, Ira M. Katz, Plantation, Florida
Ira M. Katz
March 25, 2012
Anita, My sympathies go out to you at this time of loss. As a player for Ron at NDSU, he gave me a major life lesson in learning how to extend myself and have a greater belief in what I could accomplish. I will always be indebted to him. A terrific coach and overall good man! I, along with many of my teammates whom I've spoken to since his passing, will miss him.
Tom St.Aubin
March 24, 2012
May your hearts soon be filled with wonderful memories of joyful times together as you celebrate a life well lived.
C.S
March 24, 2012
Sorry for your loss. Praying for God to comfort you and bring peace that only He can give.
Susan
March 24, 2012
Ron Erhardt was my Uncle and was a very caring and kind man. He will be truly missed by all that knew him. Aunt Anita (Faye), you know you can ALWAYS call me when you feel like talking. I love you and we're really sorry for your loss.
Tracey Short
March 23, 2012
Anita,

So sorry to hear of the loss of Ron. Ray and I send our condolences.

Ray and Maryann Fuller Oakland NJ
(Marie Hohmans daughter)
Maryann fuller
March 23, 2012
I don't know if you will remeber us, Anita. You and Ron were among our favorite customers at our little B-W Dry Cleaners in Wyckoff. Our prayers are with you and your family.....Ron will not be forgotten for the wonderful human being that he was. Margie & Connie Peters
March 23, 2012
Dearest Anita, So sorry for the loss of your dear Ron. If there was such a thing as a "Nice Guy Book", Ron would be at the top of the list. We cherish our memories of you and Ron when he was with the N.E. Patriots and our friendship and all of the fun times we had. We are thinking of you and hoping that time will help you and your lovely family will bring you comfort. Anita, I wish we could give you a hug right now! All our love,
Dick, Barbara & our Guardian Angel Kim.
Barbara Kinter
March 23, 2012
hell of a guy
jack kartman
March 23, 2012
Ron was one of the nicest men I've ever met. Kind, cheerful and humble. Our prayers and sympathy are extended to Anita and all the kids & grandkids. He loved you all so very much and will be waiting in heaven.
Kelly & Lynette Vorachek
March 22, 2012
Please accept my condolences Anita. He was a great Leader of young men. We will all miss him.