Bemis, Scot Andre
45, of Gilbert, AZ, died Sunday, January 22, 2012. A visitation will be held on Friday, January 27, 2012 from 5:00 p.m. to 8:00 p.m. with Rosary to be recited at 7:00 p.m. at St. Anne's Catholic Church, 440 East Elliot Road, Gilbert, AZ 85234. A Mass of Christian Burial will be celebrated on Saturday, January 28, 2012 at 10:00 a.m. at St. Anne's Catholic Church, with burial to follow at Queen of Heaven Catholic Cemetery 1562 East Baseline Road, Mesa, AZ, 85204. Scot is survived by his wife, Melissa, and his children, Brianna, Makenzie, Maximus and Mace. He also leaves behind his parents, Loren J. "Buz" and Joyce Bemis, and his three siblings and their spouses, Jeff (Amy), Lance (Mary) and Beth (Joe), along with niece Haleigh, and nephews Justin, Cody, Nicholas and Cade. Scot was a valley native who attended McClintock High School and went on to be a respected teacher and coach at both McClintock and St. Mary's High School. In 2002, Scot started the Notre Dame Preparatory football program and led his teams to consecutive class 4A Division II State titles in 2007 and 2008. He also coached Notre Dame's girls soccer team, leading them to numerous victories and accomplishments, including the 2009 State Championship. Outside of the sports arena, Scot was a beloved teacher who was as committed to motivating his students to learn as he was inspiring his athletes to win. Scot was a man of great faith, of great devotion to his family and of great friendship. He will forever be remembered for his leadership, character and compassion, as well as for his sense of humor, which reminded us all not to take life too seriously. Scot will be missed by all whose lives he touched. Arrangements entrusted to Queen of Heaven Catholic Mortuary.

Anna Garrett- McClintock High class of 85
January 27, 2012
To the Bemis families: I am so very sorry for your loss. My heart hurts for you all. I never knew Scot, but I attended Our Lady of Mt Carmel with your family (same class with Lance). When I read of Scot's cancer battle in the newspaper, I began praying for you all. May our Lord bless and comfort you in the days to come. With deepest sympathy, Colleen (Van Wormer) Boroughs Mesa, Arizona
Colleen Boroughs
January 27, 2012
Makenzie-
My thoughts and heartfelt prayers are with you and your family through this very tough time. Blessings...
Linda Curran
January 27, 2012
Scot was a breath of fresh air and a great prankster. I had the opportunity over 10 years ago to hang around Nub as he was playing softball with Jeff and many other Germs as we were called that were from the Tempe McClintock days. It was such a pleasure to be welcomed into that circle. Scot was always smiling and having a good time. His passion and success as a Football coach was no accident, he truly had a gift. It does not surprise me, but it amazes me as to how many people he reached in his young life. I was blessed to know Scot if even for one moment in time so many years ago. To the whole Bemis family my deepest heartfelt condolences. Scot, til we meet again I was blessed to know you.
Rick Nunez
January 27, 2012
May God welcome you with open arms and provide comfort for your family. Your passion for life will always be remembered. You will be missed!
Once a Charger always a Charger
Paul Bradley
January 27, 2012
Your life was a gift from God to our family. We are very blessed to have known you. We will take care of your family Coach and miss your smile. Thank you - for your example to our young men. Get after it!!!
Dave, Kathi, Brendan, Connor, & Sean O'Brien
January 26, 2012
Scot was exactly what Jesus had in mind whem he called the men disciples. You were the best!! My love to Mackenzie and the family. I will miss him!!
Barb Stanley
January 26, 2012
May God comfort you in your time of loss.
"Once a Charger, always a Charger"
Praying for comfort,
Linda McClintock Class of 1999
Q. What is your only comfort in life and in death?
A. That I am not my own,but belong--
body and soul,in life and in death--
to my faithful Savior Jesus Christ.

He has fully paid for all my sins with his precious blood,and has set me free from the tyranny of the devil.
He also watches over me in such a way
that not a hair can fall from my head
without the will of my Father in heaven:in fact, all things must work together for my salvation.
Because I belong to him,Christ, by his Holy Spirit,assures me of eternal life
and makes me wholeheartedly willing and ready from now on to live for him.
Linda Rinchack (Propheter)
January 26, 2012
Our gratitude to Scot for being a great science teacher. He really made a difference by believing in his students. He will be missed.
January 26, 2012
All my love to Brianna and Makenzie and the Bemis family. Rest in peace, Scot.
Kama Schmidt
January 26, 2012 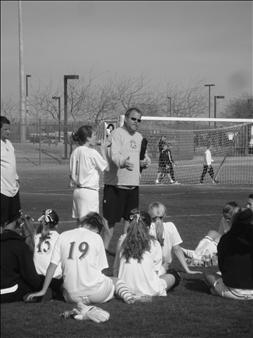 Anyone from Notre Dame who attended school on Monday, January 23rd, would know the great extent of our love for Mr. Bemis. It goes to show that when you die, it doesn't matter how much money you had, or what car you drove. What matters- what people will remember- are the things you did and the kind of person you were. That will be your legacy. Mr. Bemis created a beautiful, lasting legacy. A legacy that I know I'll never forget.
Kelsea Francis
January 26, 2012
God Bless and may peace and love surround the Bemis family and all that lost such a treasured friend, role model and coach. I only knew Coach Bemis as a football coach and teacher on campus at MHS and did not have the experience of having him as my teacher, but he was certainly well known for his jovial and uplifting attitude and it is very apparent he has positively impacted the lives of so so many and for that I am proud to be a fellow Charger, his presence will always live on in these schools where he gave so much of his heart and soul. Rest in Peace Coach Bemis.

McClintock, Class of 2002
Ali Carter (Brockmeyer)
January 26, 2012
Probably the best teacher and coach I ever had. I Hope i can carry on to others even some insperation and greatness that he had on me. He will be missed greatly.
justin hazard
January 26, 2012
Dear Bemis Family,
Scotty, as I called him, is a man who is larger than life itself. He emulated everything that he talked about and the way he modeled how to live life will never be forgotten by anyone who had the pleasure of knowing him. It was noted recently that now he is free and is playing football on God's team, watching over us all.
And while I won't be hearing his voice calling my name, I shall never forget what it sounds like, as Ray-Ray is what he called me.
We miss you Scotty.
God Bless!
Ray Medhus
January 26, 2012
Your teaching and life lessons will forever be with me... may you rest in peace. God bless your family.

McClintock Class of 2000.
Melissa Walley
January 26, 2012
Scot (Nub), you were a dear friend in college. Your passion in everything you did will be missed.
Tony Gabriele
January 26, 2012
Scot (Nub), you were a dear friend through college. Your passion in everything you ever did will be missed.
Tony Gabriele
January 26, 2012
Brie & Makenzie: You haven't left my thoughts at all this week. I will continue praying for your entire family. Scot was truly an amazing human being, with the world's greatest smile and voice. I see so much of him in you guys, and will never forget Melissa's and his wedding day. He has truly left a lasting impression on all of us. I love you both more than words.
ellen polcari
January 26, 2012
Our hearts go out to Scot's family. Scot mentored so many young adults on and off the field. He was the best part of my kids' day. He will be sorely missed but always remembered.
Mary Beth Groves
January 26, 2012
My prayers and thoughts go out to the entire Bemis family. Scott was not only a great coach and mentor, but he was truly a class act. He made a difference in both my childrens lives at Notre Dame. Thank you for sharing him with us, we will miss him. God has a great coach on his staff. Rest in peace.
Kim Spector
January 26, 2012
Our thoughts and prayers go out to the Bemis family. May the comfort of Scot's lasting impressions on the lives of so many be forever in all of our hearts. He will live on through the lives he has touched, the laughter he has brought into our children's lives and his loving heart, shared with so many. God Bless
The Barrios'
Danielle 07', Austin,TX
Stephen 05', Paradise Valley, AZ
Tim & Marie Barrios
January 26, 2012
Coach Bemis,

You were a great coach and mentor to me and my teammates. We love you and I have been thinking of you and the amazing legacy you have left behind. I just realized your son is named Mace reading your obituary. It cannot be a coincidence that my son, Mase and Mona's son Mase and now your son were all named after Mace Vicera who left us 11.11.2001. I hope you two are together now talking about football. We love you coach!
Derek Greene
January 26, 2012
My heart breaks for the Bemis family. Mom and I remember when Scot was young, he always had a smile and a hug for most. He carried these wonderful parts of character into his adult years and added many more. Little brothers are special always and forever.
Diane Duffey
January 26, 2012
Melissa. You and the family will continue to be in our prayers. May God continue to bless you and hold you in the palm of His hand.
Dina Romo
January 26, 2012
Scott, GOD bless your family as they journey through this difficult, sad time. What a gift your short life has been to all of us ~ blessed enough to be touched by you and your family. You have left our children, our community a better place and your light will shine on through all of us. My prayers are with your family, but I believe you will continue to be an angel watching over them. Michelle (Earle) Knox
Michelle Earle Knox
January 26, 2012
Scot will be greatly missed,he was a wonderful neighbor who had a great laugh and made the BEST food for our block parties! Our thoughts and prayers are with Melissa and all the family.
Vial Family
January 26, 2012
I had the pleasure of being coached and taught by Coach Bemis at St. Mary's. He was both an inspirational teacher and coach. He had a personality that was larger than life. More than anything, he was a genuine person who truly cared about his students/players. He could relate to anyone, motivate anyone, and no matter how bad your day, he could bring a smile to your face.