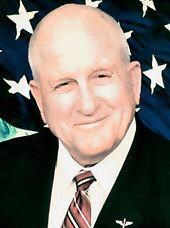 Simmons, Thurman
Thurman Simmons, legendary coach and teacher, 84, passed away at home on July 24 2015 surrounded by his loving family and friends. He was born April 25, 1931 in Plainview, Texas to Thurman and Martha Simmons. He is preceded in death by his beloved wife of 57 years, Carolyn. He is survived by his four children, Thad Simmons (wife Teri), Ann Clark (husband Steve), Thom Simmons, and Kay Zobrist (husband Scott), and seven grandchildren: Sara, Kristen, Kyle, Jonathan, Caitlin, Jake and Zachary. Thurman graduated from Lovington High School in Lovington, New Mexico. He attended New Mexico Highlands University in Las Vegas, NM before enlisting in the United States Air Force in 1950 to serve his country during the Korean War. He served honorably and was a proud member of the Johnson Air Base Gunners football team, which won the Japan Inter-Service Football Championship in 1952. After four years he was honorably discharged and completed his degree at Highlands in 1955, where he was a football letterman. Thurman and Carolyn married in 1955 and began their careers as educators in the tiny town of Weed, NM. Thurman was a dedicated coach and teacher. In addition to Weed he coached football at Farmington, NM before moving to Arizona in 1959. His teams at Parker, Holbrook, Tolleson, Carl Hayden and Seton high schools won 12 division championships and produced many inspired coaches, loyal teammates and upstanding young men, many of whom continued to make him a part of their lives and came to visit him in his last days. Thurman was named the Arizona Republic Coach of the Year in 1978, the Arizona Coaches Association Coach of the Year in 1979 and the National High School Athletic Coaches Association (NHSACA) District 8 Football Coach of the Year in 1980. He was inducted into the Arizona Coaches Association Hall of Fame in 1984. He received the National Football Foundation and College Hall of Fame Outstanding Coach Lifetime Award in 1996 and was named to the NHSACA Hall of Fame in 2001. As a well-known and well-respected teacher and coach, his Catholic faith, loyalty, strength of character and ability to forgive served as a living example to many. He had a lifelong love of aviation and realized his dream of being a private pilot in 1982 and enjoyed flying family and friends in his Cessna to many destinations. Thurman could have been defined solely by his career in football, but to those who were closest to him he was known as someone to depend on for sage advice and heartfelt compassion. A Funeral Mass will be held at Blessed Sacrament Catholic Church at 512 N. 93rd Ave Tolleson, Arizona on Saturday, August 1, 2015 at 10:00am In lieu of flowers, please make donations to Hospice of the Valley (www.hov.org).


Published by The Arizona Republic on Jul. 28, 2015.
To plant trees in memory, please visit the Sympathy Store.
MEMORIAL EVENTS
To offer your sympathy during this difficult time, you can now have memorial trees planted in a National Forest in memory of your loved one.
MAKE A DONATION
MEMORIES & CONDOLENCES
31 Entries
I can only say what a wonderful influence Thurman had on my son Darrell and his friend Scott. I am sure he is partly responsible for the good man Darrell is today. Thank you for being part of his life.
Susan Renek
School
July 22, 2021
Raymond Lopez
Student
September 14, 2016
Thurman Simmons, Coach to so many of us, was an unusual and extraordinary man. For me, he was a major, even a critically important and timey influence in and on my life. His passing is not complete: He leaves amazing memories, for me and I'm sure for many others, that will survive generations. I have told my children about him and I expect to tell my grandchildren as they reach a stage when they can fully appreciate him.

I'm so glad to have spent some time with Thurman in Farmington at our last reunion. My condolences to Thad and the family. I know you all will miss him but the good news was that you were privileged to have him for such a long time. What a guy: Not just a legend, but an exemplar to those of us lucky enough to know him.
John Loehr
August 21, 2015
Mr. Simmons was one of my favorite teachers and I appreciate everything he taught me by example. Everyone loved him.
Patti McKinnon Ashe
August 11, 2015
Thurman was a great collegue and upstanding individual in everyway. His honesty and love of life and lives will always be remembered. After I moved he made sure to visit when he traveled to Ohio. Just how loyal he was. My deepest condolences especially to all his family. I will always remember/carry his time and influence in my life. Peace.
Tom Kirsch
August 4, 2015
Coach Simmons, you meant more to our family than you will ever know. God Blessed us with you in countless ways. My thoughts and prayers are with your family at this time.
Susan Renek
August 3, 2015
My deepest condolences to Coach's family. He was a great football coach, leader and inspiration for all who played for him!
Danny Garcia
August 3, 2015
Coach Simmons, thank you for teaching me about not giving up. I played football at Tolleson HS from 1979-1981. There were games that I never played in unless we had a great lead. I could of quit at any time, but it motivated me more, to not be a quitter. I learned this from Coach Simmons. He was strict!! But that is what I needed. When I went to Marine Boot Camp in the summer of 1988, six years after graduating from TUHS, it was tough at the age of 23. Coach Simmons philosophy of not giving up, got me me through boot camp. I am now a teacher at Sierra Linda HS, in TUHS District. I strive to encourage students, just like Coach Simmons did, God Bless Coach Simmons and his family.
August 1, 2015
Coach Simmons, you mean so much to our family and you will be deeply missed. - The White's
Hugh White
August 1, 2015
With our deepest sympathy. May your treasured memories, family and God give you comfort and the strength needed during this difficult time.
Dennis and Marita Carroll
July 31, 2015
Coach Simmons was a great man and coach he coach Castro,Maya, and Ancliff brought prosperity to Parker when they came and it will never be another set of coaches assembled like that again R.I.P Coach.
tim miller
July 30, 2015
Coach Simmons - we miss you and send you our condolences. Our prayers are with the Simmons family.

The Roll Family
July 30, 2015
Our prayers are with the Simmons Family. We were close neighbors in Parker and often had coffee after mass on Sunday, It was good to see the children growing up receiving the love and attention from Carolyn and Thurman. All four of them have certainly made their parents proud. Our prayers and God's blessings are with you all.
Leona and Rudy Gonzales and Family
July 30, 2015
Thurmon was one of the nicest guys I've had the pleasure of knowing.He was a loyal customer, I have maintained his airplane for the last 30 years. Rest in piece Thurmon!
Tom Town
July 30, 2015
You will always hold a special place in my heart. Prayers for your family and all those that loved you. You will forever be in our memories, we were so privileged to have you in our lives.
Rox Norris
July 30, 2015
My condolences to the Simmons' family. It was an honor to recently spend time with Coach and reminisce about our days at Parker.
Bobby White
July 30, 2015
Our hearts & prayers are with the Simmons Family. Thurman's Gift, touched many lives in such an extremely positive way, Ours included. Men of His Caliber are greatly needed and will always be greatly missed. Rest in Peace my Friend, Feeling Very Honored
Dan Nasser
July 29, 2015
I still have fond memories of Coach from my freshman year at Farmington High. I had him for Social Studies, PE and freshman basketball coach. I'm sorry I lost track of him but must say that I was not the least surprised to read of his long and distinguished career, strong faith and loving family. He will be missed.
Jim Rose
July 29, 2015
Ken and I extend our sincere condolences to Thurman's family and friends. May your memories comfort you.
Denise Wolfe
July 29, 2015
To the Simmons Family so sorry for your loss. He was a tremendous influence in my life, From Dempsey Scott and Family
Dempsey Scott
July 29, 2015
We at Seton Catholic Prep want to extend our sympathy to Coach Simmons' family. Coach Simmons coached for us only a short time at Seton, but left a lasting legacy.
Principal Collins
July 29, 2015
So sorry for your loss. I will always remember him with so much love and respect. My love and prayers are with all of you.
Carmen Santos
July 28, 2015
Coach Simmons was one of my high school heros. He was a great teacher who cared about his students. The world is not as good a place without him.
Terry Szink
July 28, 2015
My prayers are with the family. Loved coach Simmons. Was so fun being a cheerleader for Holbrook high when he was the coach. I will not be able to attend because I will be attending Coach Heward funeral, as he is my brother in law. God bless all of you.
Rebecca Rice (Roes)
July 28, 2015
The Ashcraft family we are so sorry for your loss he will be missed.
July 28, 2015
God bless you Mr. Simmons. Thank you for your generous heart and spirit. I will always be grateful for your kind words and kindness shown to me. When I sit in the front pew, I will always see you sitting there with me. Godspeed and rest in peace good and faithful servant.
Mary Lopez
July 28, 2015
Thurman, you'll be missed! May the Lord give your family the peace to say goodbye!
Henry Evans
Tolleson High School Board Member 1976-1980
La Jolla, CA
Henry Evans
July 28, 2015
Thurman was an inspiration to everyone who knew him. We shared 2 grandchildren and he was a wonderful granddad, leaving a legend of honor and love.
Arlene Zobrist
July 28, 2015
Thurman will be missed. Words cannot describe what an impact he has had on my dad (Pete) and directly on my family. His legend will live on!
Sam Blake
July 28, 2015
Thank you Coach, you will be missed.
Angel Padilla
July 28, 2015
I will miss Mr. Simmons so much he has been such a wonderful friend to my father and to our entire family. We all loved him dearly and will never forget him and what an amazing man he was.
Andrea Castro
July 28, 2015
Showing 1 - 31 of 31 results