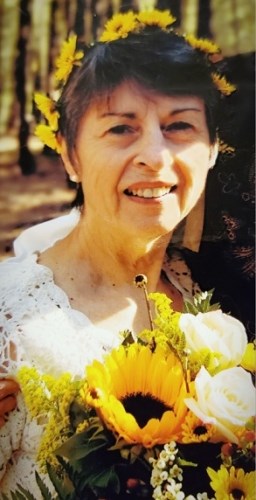 Ann Mary McDonald passed away suddenly on October 26 in Flagstaff, Arizona from a cerebral hemorrhage at age 82. The essence of her core was her family, for which she was forever loving and supportive. Ann loved travel, camping and hiking in the outdoors, fine food, flowers, frogs and family celebrations.

Ann was born in Potsdam, New York to Frances and Agnes Farrington. Affectionately known as "Annie", she grew up in Norwood, New York. Ann is survived by three siblings, two brothers, Dale Farrington and Lee "Rusty" Farrington, and sister Jane LaHair and their families.

Ann met Gordon Noreau in upstate New York in 1956 and they were married in 1957. He became a National Park Ranger and that career took them to Montana (training) and to parks Fire Island, New York; Assateague, Maryland; and ten years at the Grand Canyon. During those years Ann worked at various schools and the last years as administrative assistant to the park Superintendent through 1983. This marriage produced her surviving children Cindy Noreau, Pete Noreau (Nancy), Julie Roberts (Ricky), and Lisa Noreau, and their families.

Ann then moved to Flagstaff where she worked at Northern Arizona University, WL Gore, and then retired in 2006 after 20 years as the administrative assistant to the Superintendent of FUSD. Although then divorced from Gordon, she arranged for her children to accompany her to see him in Florida where he was suffering from terminal cancer.

Ann met Robert "Bob" McDonald in April, 2003. That was the beginning of an extra-ordinary journey of love, trials, and tribulations. That journey may be best summed up as follows. Great relationships aren't great because they have no problems. They are great because they care enough about the other person to find a way to make it work. They enjoyed the intimacy of dinner together in the evening, then, frequently, sat close holding hands while watching TV and that us how they spent their last evening together. That, in a nutshell, represents their love story.

At the time Ann & Bob met, Bob did considerable photography for Arizona Highways Magazine and other publications. They made many trips together doing photography.

Ann & Bob with their family members had many gourmet dinners around their antique dining table that seats 16 persons.

Ann and Bob made many trips to upstate New York, where Ann grew up, visiting Ann's sister, Jane, brother, "Rusty" and Bob's son Jon. Each trip, usually, involved some time in New York City going to Broadway musicals, visiting museums and other sights and having dinners in some of the fine restaurants.

They also enjoyed camping trips with family members or just the two of them. One of their favorite camping trips was to the North Rim of Grand Canyon.

Although Ann's "candle" burned out too soon, Bob, and all family members and friends treasure the time we had together. Due to the restrictions of Covid 19, no immediate service is planned. However, if possible, we will have a Celebration of her life this coming Spring.

In lieu of flowers, please make donations to either Flagstaff Unified School District at www.fusd1.org/Page/129 (This is an Arizona Tax Credit). You may write "In Memory of Ann McDonald" in the description box. Or Grand Canyon National Park at [email protected]

This obituary may be viewed and a message left at: www.norvelowensmortuary.com.

To plant trees in memory, please visit our Sympathy Store.
Published by Arizona Daily Sun on Nov. 11, 2020.
MEMORIAL EVENTS
No memorial events are currently scheduled.
To offer your sympathy during this difficult time, you can now have memorial trees planted in a National Forest in memory of your loved one.
Funeral services provided by:
Norvel Owens Mortuary - Flagstaff
GUEST BOOK
1 Entry
I´m so sorry for your loss. Ann was a wonderful friend and coworker. She was a rock during difficult work days.
Kim Woolbright
November 11, 2020