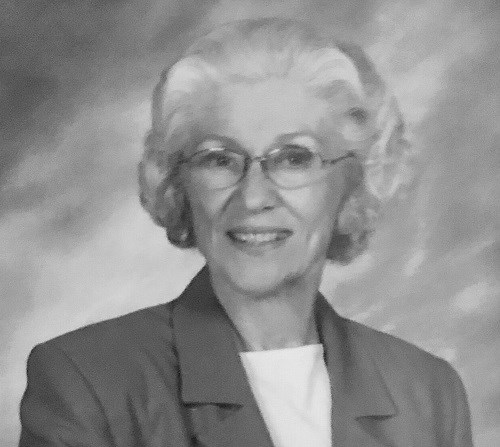 From the Beginning to the End

Bete was born in Los Angeles, CA in 1927 to Esther and Kaye Rex. Esther was the daughter of an Arizona pioneer family who were among the first traders on the Navajo reservation in the later 1800's. As a member of the "greatest generation", Bete came of age during the depression and wars. She enjoyed telling her kids stories about all the young sailors and soldiers stationed in LA preparing to shove off to the South Pacific. Resilience, patience, and self-sufficiency were learned at an early age. She lived a life of compassion, joy and empathy and put service to others above herself. She was very generous with her many contributions.

In the summer of 1946, Bete and her twin sisters came to Flagstaff to visit their aunt, Billie Yost. During this visit, Neil V. Christensen, a young attorney in town, asked her to marry him. She told him he was crazy. He pursued her with letters, phone calls and visits to California. The following summer they were married in Flagstaff, at her Aunt Billie's house. Her one stipulation was that she had to return to LA frequently to see the ocean! They had four children: Tom, Kay, Paul, and Jim. Their home was full of activity ranging from political fundraisers to Sunday night Mexican feasts with the Vern Seidel family. Bete was truly the lady of the house and was cherished by Neil. They were great role models for living life with dignity. She could dance, catch a baseball without a glove and was a great cook. When Neil unexpectedly passed in 1966, Bete was solely responsible for the four children who were 10-16 years of age. She often said about difficult times, "you get a little time for a pity party and then you pull up your socks and move forward." She did not suffer fools or whiners lightly.

Community involvement was important to Bete. She was a member of the Flagstaff Symphony Guild, Gamma Phi Beta, NAU faculty wives, PEO, Assistance League and Eastern Star. She was spiritual and an active member of the Federated Community Church. She was an avid bridge player and played regularly with her bridge club friends, Therese Fronske, Marie Rolle, and Marie Stilley. She continued to play into her late eighties.

She started most days with morning walks with Joyce Killip and others to excite the molecules, discuss current events and pick up litter in the neighborhood. Bete would say, "if you rest, you rust and if you rust, you rot!" Dottie Dierker was a special friend of hers. They were partners in The Yesterday House antique store, a hobby they used for socializing and as an excuse to travel to collect more antiques! In the evenings, they would sit on the porch enjoying a glass of wine.

In 1972, she married Eugene Grape, who was a business professor at NAU. Bete became the loving stepmother to Gene's 4 kids: Laurie, Mark, Jody, and Eric. Gene was from the east coast and occasionally would take a faculty exchange to New England to teach while Bete searched for more antiques. They both loved music, song, and dance. Together, they enjoyed exploring the countryside of New England, California, and Oregon, visiting their families, and searching for more antiques!

Bete's spirit was always in Flagstaff. After Gene's passing in 2003, she drew strength from her volunteer activities, church and social events with her friends and being grandma to 8 grandsons, 2 step-granddaughters and 6great grandchildren. She was comfortable in high society or picnicking on The Peaks. She had high expectations of herself. She improved the lives of all who knew her and dedicated herself to making Flagstaff a better town for everyone.

In 2010, Bete moved to San Luis Obispo, CA to be near Kay. She was a beautiful and gracious lady to everyone around her. She was in assisted and memory care facilities for the last several years. She would often say "Lord, what more do you want from me"? On June 22, 2021, she completed her journey.

If you would like to make a donation in her memory, she would love for you to contribute to the world by living a life of service, love, and compassion and by living each day as though your mother is watching.

Published by Arizona Daily Sun on Jul. 22, 2021.
To plant trees in memory, please visit the Sympathy Store.
MEMORIAL EVENTS
To offer your sympathy during this difficult time, you can now have memorial trees planted in a National Forest in memory of your loved one.
MAKE A DONATION
MEMORIES & CONDOLENCES
3 Entries
Aunt Bete always had that beautiful smile and an offer of good food or snacks. Life as a kid was a wonderful thing in Flagstaff especially when we had loving relatives living within walking distance. Your life was full of touching others and that is a precious gift. See you later Aunt Bete.
Donna I Christensen-Henry
Family
July 26, 2021
I am so saddened to here that Bete has passed away! My next store neighbor growing up! She was so special.so beautiful and classy. I always loved her. As an adult we both shared a love of antiques and I would often visit her booth at the Carriage House Antiques.she was just lovely!
Susan Compau
Friend
July 24, 2021
To the Christensen family, my heartfelt condolences. To lose someone like her must certainly leave a deep void. What a matriarch your mom was. Sounds like she led an incredibly interesting life, packed with people, travel, many personal interests, two wonderful husbands and most of all, a large and loving family. Who could ask for more?
Kerry Davis Stutzman
Other
July 24, 2021
Showing 1 - 3 of 3 results