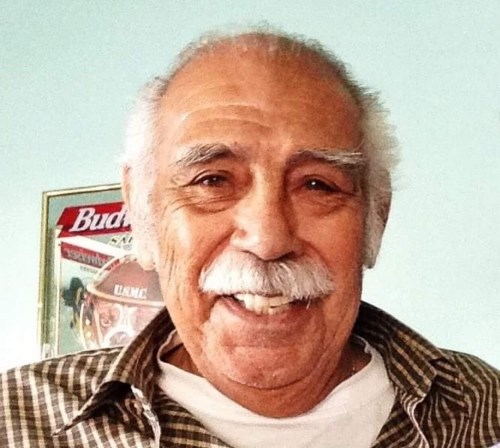 Eberto Antonio Barela, 86, born September 25, 1934 in Flagstaff AZ, passed away at Flagstaff Medical Center on January 8, 2021 surrounded by loved ones. He was known to many as Tito, Tony, or Oso. Eberto was a longtime resident of Flagstaff and a member of the Armed Forces serving on the USS Hopewell as a Gunners Mate during the Korean Conflict. He served in the Navy from 1953 to 1957, the Navy Reserve from 1957 to 1961, he later went to the Army National Guard where he retired in 1988. A few of his hobbies were playing baseball, dominos, and pool at the American Legion.

Eberto worked and retired from Coconino County plowing snow and maintaining roads and from the City of Flagstaff Water Treatment Plant. He enjoyed sunny days, listening to Mexican music while working in his shed, watching westerns, and college sports along with family get-togethers. He was Santa several times at the American Legion and National Guard Depot in Bellmont. Eberto was known for being very caring and always willing to lend a helping hand to anyone in need. Eberto's memory will continue to live on through his loved ones.

In death he is preceded by his parents Alberto and Ofelia Barela and sister Louisa (Vo) Ormsby. In life he is survived by his wife of 63 years Dolores Barela, three children Gerry Barela, Larry Barela, and Michelle (Domingo) Alonzo; two sisters Lina Rascon (New Mexico) and Pilar Lovato; seven grandchildren and 14 great-grandchildren; along with numerous extended family members and many friends.

Private services will be held January 27, 2021 with military honors following at Calvary Cemetery.

To plant trees in memory, please visit our Sympathy Store.
Published by Arizona Daily Sun on Jan. 22, 2021.
MEMORIAL EVENTS
Jan
27
Service
Jan
27
Service
Calvary Cemetery.
GUEST BOOK
9 Entries
What an amazing person you are and have been to all that knew you! The friendship you offered and gave so freely has touched so many. God speed and bless your family and console us all with the promise that we´re shall meet again The Tress Caballeros Rest In Peace my friend
Charlie Hernandez Sr
January 24, 2021
My condolences to the family. His positive happy nature is my fondest memory of Tito. Heaven will love him
Nazario Mary Lou
January 23, 2021
Dad u were a strong man and helped me a lot we had some great memories going all those trips around flagstaff on Saturday after breakfast I´ll miss you dad
Larry
January 23, 2021
Rest In Peace my friend in my prayers glad to know you your now with my husband hard to believe it´s been a year since your nephew left us now here we are almost a year later now you love you God Bless
Jackie Reyes
January 23, 2021
We grew up together like brothers. We shared many moments with friends and family. May you rest in peace, my brother. Love, Johnny & Pat
Johnny & Pat Reyes
January 22, 2021
I´m so sorry for your loss may you all find peace. And remember the good memories
Belinda Myers
January 22, 2021
Brother, We know how special we were to you and you know how very special you are and will always be to us. We were unable to see or talk to you to say good bye, but like Papa used to say, this isn't good bye it's "I'll see you later". I Love You Bro. Berna
Bernadette Barela
January 22, 2021
My condolences to his sisters, Veronica and Berna Barela. May your brother rest in peace.
Dianne Gutierrez
January 22, 2021
In loving memory I will surely miss our talks ure smile and our " good morning's " no matter what time of day it was. Dad Barela I Love you
Syndi M Gomez
January 22, 2021