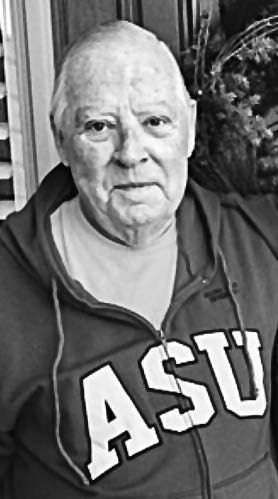 Gary Wayne Prosper, age 85, of Fountain Hills, AZ passed away peacefully on 1/9/2021, after complications due to long standing heart disease which was non-COVID related.

Gary was born in Massena, NY to Joseph and Blanche (Gratton) Prosper on 6/18/1935, and graduated from Massena High School in 1953 excelling in both academics and athletics.

After graduating, he had a brief stint at Union College in Schenectady, NY, then joined the military in 1954, spending time in Korea, being discharged in 1956.

Following discharge, he married the love of his life, MaryEllen Faucher, had son Andy and daughter Tracie, attended Clarkson College in Potsdam, NY, graduated SUNY at Potsdam with a degree in education, then taught high school math for 6 years at Massena High School. He was an active skier and was on the Lake Placid ski patrol, played semi pro football and coached his son's hockey teams.

In 1971, the family moved to Flagstaff, AZ where he took the position of Assistant Superintendent of Flagstaff Public School District for 10 years. While in Flagstaff, he made many lifelong friends, enjoyed hunting, fishing at Lees Ferry, officiating high school football, tennis, cutting firewood, playing poker with his buddies, finding the perfect Christmas tree, and especially being involved in his kids many sporting activities.

In 1980, he retired his skis and snow shovel and moved to Fountain Hills, AZ where he became Principal/Superintendent of Fountain Hills School District. He then moved on to Arizona State University as Director of Support Services before returning to public education administration as Principal of Anderson Junior High School in Chandler, AZ.

Following retirement, Gary stayed active in education, teaching math at the Community College level and was a hearing officer for the Scottsdale School District.

Gary was an avid fisherman and would drive cross-country many summers with his beloved Golden Retriever "Sam" to fish the St. Lawrence River in Massena, NY. He loved all things sports, especially ASU and a day without a cigar meant he must be sick. The highlight of every year was Christmas Day with the entire family around the table having a part singing "The 12 Days of Christmas "

Due to the current COVID restrictions, a private memorial will be held at a later date.

To plant trees in memory, please visit our Sympathy Store.
Published by Arizona Daily Sun on Jan. 24, 2021.
MEMORIAL EVENTS
No memorial events are currently scheduled.
To offer your sympathy during this difficult time, you can now have memorial trees planted in a National Forest in memory of your loved one.
GUEST BOOK
2 Entries
Gary was the father in law of my sister, Sharon and was a very fun and loving person. He will be missed by us all.
Karen Willis
January 28, 2021
We are sending our Condolences to the Prosper Family. Know the wonderful memories will always be in your heart.
Steve and Connie Weatherby
January 24, 2021