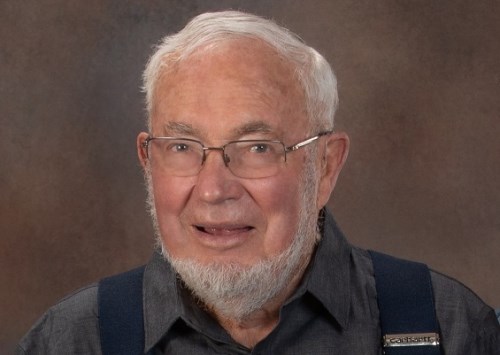 Dr. George Harges Yard, an unforgettable character in the Flagstaff community, passed away on December 24, 2020 at the age of 90. George was born in Bisbee on February 28, 1930 to Philip and Esther Yard. George was equal parts rancher and doctor, his love for the great outdoors matched only by his passion for medicine. He was a caring gentleman, generous with his wisdom, and fearless in his convictions.

George grew up on a farm outside of Bisbee where he first became a cowman. He earned the rank of Eagle Scout and was a delegate to the first Arizona Boys State. He graduated from Bisbee High School in 1948. With the aid of a Phelps Dodge Scholarship George attended the University of Arizona and was a champion bull rider, a state champion wrestler, and forever banded with the Sigma Chi Fraternity. George received a Doctorate of Medicine in 1956 from Northwestern University Medical School in Chicago.

George served as Captain in the Army Medical Corp in West Germany from 1956 to 1960. He received the Army Commendation Medal for meritorious service and continued as Captain in the Army Medical Corp Reserve from 1960 to 1968. In 1960, George and family moved to Flagstaff where he practiced medicine for nearly thirty-five years as a Family Doctor. He was honored to have delivered several thousand Flagstaff babies including ALL of his grandchildren! Doc Yard ended his private practice in 1994 and became a Clinic Physician at William's Hospital. He retired from medicine in 2002 at age 72.

In 1975, George married the love of his life, Sharon Ann Cornelison. Together they shared everything; practicing medicine, ranching, wagoning, and playing with family and friends. One of George's famous sayings was: "The raising of cattle is a congenital defect!" Over the years, George and Sharon owned three different Arizona ranches; the X-Triangle ranch south of Flagstaff, the Bar-X ranch near Young, and finally the Y Bar D ranch in Perkinsville where they built their dream home along the Verde River and lived for over 25 years. George and Sharon sold the Y Bar D ranch in 2019 and relocated back to Flagstaff.

George cut a wide and wonderful swath that touched so many lives.

Happy trails to you, until we meet again!

A small private service was held at Citizens Cemetery with military honors where he was delivered to the graveside in his covered wagon. George was blessed to celebrate his 90th birthday with family and friends prior to the Covid-19 pandemic. A memorial celebration of his life may be held in the future.

Donations in George Yards's memory can be made by mail to: National Multiple Sclerosis Society – Arizona Chapter, 5025 E Washington St., Suite 102, Phoenix, AZ 85034-2005 or thru their website: https://mssociety.donordrive.com/campaign/Dr--George-Yard-Memorial-Fund

Memories and condolences can be shared at www.norvelowensmortuary.com

To plant trees in memory, please visit our Sympathy Store.
Published by Arizona Daily Sun on Jan. 10, 2021.
MEMORIAL EVENTS
No memorial events are currently scheduled.
To offer your sympathy during this difficult time, you can now have memorial trees planted in a National Forest in memory of your loved one.
Funeral services provided by:
Norvel Owens Mortuary - Flagstaff
GUEST BOOK
7 Entries
Sharon I am so sorry for your loss and he was truly loved by me and Edgar. I will truly miss him but will remember always
Nell Brown
January 11, 2021
Dr Yard, such an amazing man who touched my life. His stallion frequently visited our place, just down the road. He was such a wonderful person! Rest In Peace and much love. Thank you for being a part of my life!
Peter Sartorello (Glieges)
January 11, 2021
We were sad to hear of George's passing but as we know, this is a sad part of life. You made going to the Dr. quite an experience George, we loved having you as our Dr. Rest in Peace dear cowboy!
Mario and Cindy Morrell
January 11, 2021
George was not only my primary care doctor for many years he was also one of my very best friends. My best wishes are with you Sharon and may George rest in peace.
Dan julien
January 10, 2021
Happy trails Dr. Yard! You were a big part of our early days in Flagstaff when a GP still delivered babies. Our condolences to Sharon and the family.
DOLORES N BIGGERSTAFF
January 10, 2021
Our deepest condolences. George was a good friend and teacher. He inspired our work on the Verde River and provided support for the Upper Verde River RMRS General Technical Report. It is still the definitive science document on the ecology and hydrology of the River.
Dan & Vicki Neary
January 10, 2021
George was not only our Doctor but our friend. He delivered all three of our children. Took care of my mother and aunt. Our second son is named after him George. I first met Dr Yard as patient #9. He was a new doctor in town. He would become our family doctor. Attended our wedding, and shared many meals (tamales) and memories with him and Sharon. He will be missed. Our sympathies to Sharon and the family. He will Always be part of our lives.
Jesse and Irene Dominguez
January 10, 2021