Passed away January 7, 2021 in Flagstaff, Arizona where she had been residing with her son, Bob, and family for the last 15 months.

She was born April 17, 1930 in Sherman County, Oregon, delivered at home by her father on Easter Sunday.

She was the daughter of Oscar Karl and Louise Janet (Hamilton) Eaton.

Raised in Pendleton, OR., Janet began her married life in Portland, OR., and then 10 subsequent years in Lake Oswego, OR., where her husband, William (Bill) Clark Perry, Jr., owned and operated a finance business, while Janet raised their three children, JoAnne, William (Corky) and Robert (Bob).

She and her husband, Bill, then packed up the family and moved to Flagstaff, AZ., in 1969 where they owned and operated the Travelodge Motel for 31 years. After Bill's passing in 1992 she moved to Kailua-Kona, Hawaii where she bought an oceanfront condo. She attended the Christian University at YWAM and went on mission trips to Indonesia and the Philippines. She also volunteered at the Kona Pregnancy Center, counseling unmarried girls and providing them with the options of adoption for their babies. Janet was also a Chaplain at the Kona Community Hospital, hosted weekly bible studies in her condo, and was very active in her church, Mokuaikaua Congregational Church. Janet was a member of Gideon's International and passed out bibles to the community. In addition, Janet volunteered at Kona Hospice offering support to patients and grief counseling to their families.

Janet met her second husband, Ted Myrick at a Pendleton High School Reunion. They were married in 2000, and enjoyed their life together in Kona until Ted's passing in 2012.

Janet loved to paint, her smile could light up a room, and she never met a stranger. Janet simply loved people, and perhaps her greatest strength was her endless and inexhaustible gift of exhorting, or "lifting" people up, to restore joy and happiness into their hearts. Her single-minded goal was to see a smile on every person's face that she met! But before all that, was her unwavering love for Jesus. She would share His love at any opportunity. In Janet's own words, she wrote, "If I could live my life over again, I would trust Jesus more."

She is preceded in death by her parents, brothers William Eaton and Robert Eaton, husband William Perry and husband Ted Myrick.

The family plans to have a graveside service in Pendleton, Oregon sometime in the summer.

If you wish to honor Janet's memory, a donation can be made to FaithWorks, P.O. Box 2757 Flagstaff, AZ 86003 in her name. The money will be used to help dig a well for the Native Americans on the Navajo Reservation, a cause that was close to Janet's heart.

We will miss you Mom. Love always.

To plant trees in memory, please visit our Sympathy Store.
Published by Arizona Daily Sun on Jan. 24, 2021.
MEMORIAL EVENTS
No memorial events are currently scheduled.
To offer your sympathy during this difficult time, you can now have memorial trees planted in a National Forest in memory of your loved one.
GUEST BOOK
8 Entries
Bob and Shanna I am so sorry to hear of your loss! Praying for you during this difficult time.
April Craney
January 28, 2021
Sending condolescences from Kailua Kona´s YWAM base. Janet was such a blessing in the many ways she served and shared Jesus with us here. This is a great photo of that contagious smile! I will remember always seeing her encouraging others. Blessings and comfort to her family.
Janet Ditto
January 28, 2021
Dear Shanna, I'm so sorry to hear of your MIL's passing. She sounds like someone I would have loved to know. I hope the wonderful memories you and your family have of her will bring comfort and joy during this season of grief. May all of you rest in the assurance of eternal life through Christ and the knowledge that someday you will be reunited with her. Love you, friend.
Karin Warzybok
January 24, 2021
I'm so sorry for your loss. Even though you know it's coming, you are never prepared. I'm glad I was able to meet her that one time at church. You two were so good to her. I know she appreciated all your support. Love, V
Vicki Shepard
January 24, 2021 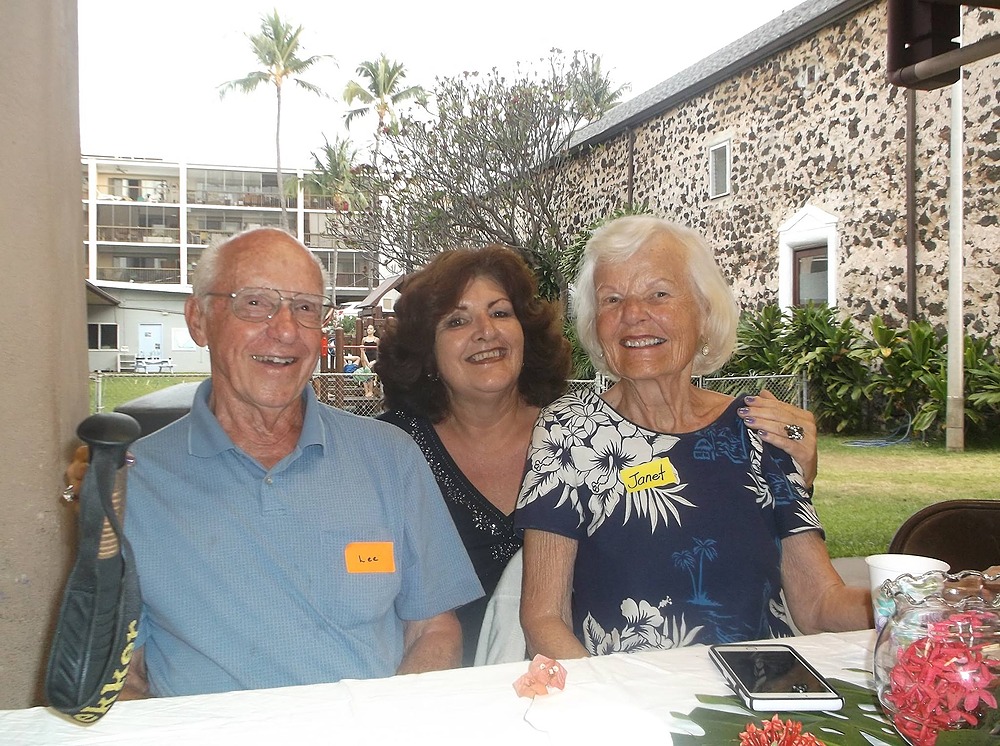 I'm sure going to miss my "Buddy" as Janet always called me. Heaven is shining brighter now that she has gone home. I will always remember her laughter, light, & love for all.
Mary Hoffman
January 24, 2021
Oh! I´m so sad to hear of Mrs. Janets passing. I was her chair yoga teacher in Kona for 4 years. She was Such a sweet lady and yes,always happy. Sge would walk from her condo over to the classes on Monday mornings at Hale Halewai.
Andrea Hutchens
January 24, 2021
We love you, Aunt Janet! You will always be in our hearts. We will always have happy memories of you in Hawaii.
Rick and Everly Eaton
January 24, 2021
What an amazing, fruitful, life! She leaves behind a rich legacy of love & service to others that flowed from her love for God. May your hearts receive comfort from God as you process the loss of her earthly presence.
Sharon Hyde
January 24, 2021