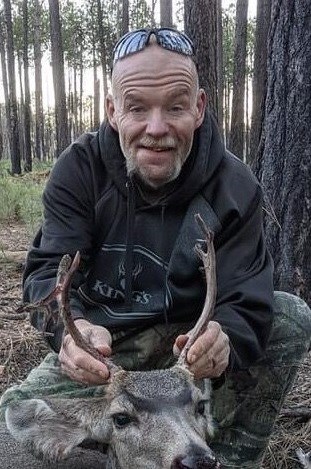 Justin was born November 22, 1973 in Flagstaff, Arizona. Justin was an avid hunter and spent much of his time with his wife and soulmate Rachelle, hunting and fishing. His newly found passion was big game hunting with a muzzleloader and his first successful hunt was on October 23,2020. Everyone who knew Justin knew his passion for collecting antlers. Anyone who visited him was given the official tour of his "shed" room where he could recall the exact location where he had found each one.

Justin also loved fishing. When he was small he would grab his fishing gear and ride his bicycle from the family home out to Lake Mary where he would spend the day sitting on the banks waiting for a bite. His love of fishing stayed with him his entire life. He enjoyed nothing more than spending nights on the banks of the lake with his beloved Rachelle and a variety of friends who often joined them.

Justin married Rachelle on May 22, 2010. They were best friends, hunting and fishing partners and spent every moment riding around in the woods with many of their fur babies enjoying life and each other. Justin loved Rachelle with all his heart, friends and family often commented on what a perfect match they were.

Justin graduated in the first graduating class of Sinagua High School in 1992 . After graduation Justin obtained employment with the Flagstaff Public School District where he remained for his entire working life. Justin took great pride in his job with the school district where he had started as a groundskeeper and worked his way up to district plumber. Justin was proud of getting his associates degree as a certified plumber from Penfoster College.

Justin was proceeded in death by his parents John and Sue, his brother JP, his best friend/brother-in-law Todd Halfast, as well as both his maternal and paternal grandparents. Justin is survived by his wife Rachelle and their fur baby family, his sister Bonnie, his sister-in-law Ranise (J.D) Brown, and brother-in-law Randall (Amber) McAnally, as well as many aunts, uncles, cousins, nieces and nephews. Justin was well known in the Flagstaff area and leaves behind a large group of friends whose company he always enjoyed.

Justin will be memorialized with a weekend camping trip November 21 and 22 in the Mormon Lake Area. An official service will be held on Saturday the 21st at 1pm. Guests are invited to bring their camping gear and stay overnight to celebrate Justin's birthday on the 22. Please contact the family for more information.

To plant trees in memory, please visit our Sympathy Store.
Published by Arizona Daily Sun on Nov. 11, 2020.
MEMORIAL EVENTS
Nov
21
Service
1:00p.m.
GUEST BOOK
6 Entries
Update: The location for the memorial has changed due to wet and muddy conditions around Mormon Lake. The location has moved to Sunset Crater Rd. There will be signs to direct people from 89 and Sunset Crater Rd to the location
Randall McAnally
November 18, 2020
What a great dude you were Justin . I wish I wouldve seen you the day you said you thought it was me and I thought it was you at Bearizona . Last time I saw ya . RIP my friend , God bless ya Rachel
Charles Fisher
November 18, 2020
He will truly missed by all. I enjoyed his visits to the CFCU we spent a lot of time talking about so many things. You both were the perfect couple. He is still with you forever.
Andrea Eubanks
November 15, 2020
Deepest condolences to Justin´s family, and friends. May the sweetest memories of Justin comfort you during this difficult time. In my short time knowing Justin around FUSD; I saw firsthand how Justin went above and beyond his work duties. Justin retrieved my iPhone from the bowels of a school toilet. He smiled, and kindly took on the challenge. He hand delivered my phone to another school. He was so happy for me that everything on my phone was intact. Justin smiled and we talked for a while. He loved talking about Rachelle, and her work at Kingsmark. Soulmates never leave one another. Look to the skies for he will be there.
Carrie Lamberti
November 14, 2020
I got to see Justin when he came to the transportation building. He always had a smile and a cherry greeting. My thoughts and prayers go out to you and your entire family. RIP Justin
Christine Farrell
November 12, 2020
I am so very sorry for your loss. Seeing Justin at work was always a delight. He was always smiling and always had a story. Gone far too soon.
Kim Woolbright
November 11, 2020