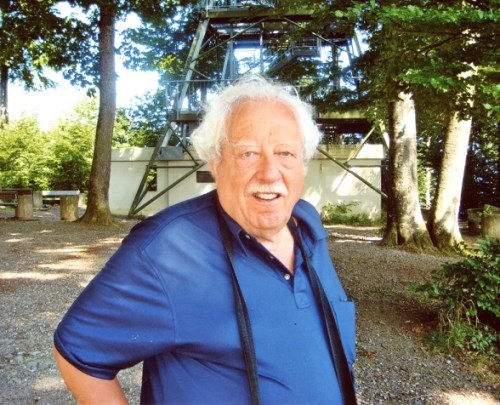 Kaspar Gantenbein born on March 22, 1932 in Schaffhausen, Switzerland, peacefully passed at his home in Flagstaff, Arizona on Sunday, October 18, 2020 at the age of 88.

Kaspar had a rich life, graduating from college with an engineering degree in 1951, he continued his studies in Architecture and Structural Engineering, graduating with his Master in 1957 from the Swiss Federal Institute of Technology in Zurich. He also served in the compulsory Swiss Army, was proficient in several languages, attained the rank of First Lieutenant and was assigned Staff Member to the Chief of Staff of the Swiss Armed Forces. Special interests included Finance, History, and travel.

At the risk of detention, Kaspar and his buddies, keeping in tune with their love of American Country and Western Music, often skipped a day of high school to go swimming in the Rhine river. Later he fulfilled his dream, coming to America and worked in Phoenix for home builder John F. Long; once established, he returned home, married the lovely Yvonne Wiederkehr and returned to Phoenix.

In 1961, they settled in Flagstaff. Kaspar then acquired the necessary licenses and actively began designing and building commercial real estate and apartments, approximately 900 homes in Northern Arizona, culminating with Swiss Manor. Kaspar then began his foreign and domestic car ownership in 1971 and ran it until 1979, retiring from his building and car business in 1984. Ever curious, Kaspar opened a travel agency where he and his family traveled the world, making new friends and acquaintances, sharing new ideas for new development and self-improvement.

Kaspar is survived by his wife, Yvonne, and his son Marc (Debi) and grandson, Alex; his daughter, Monica Mandia and her two children Eric and Morgan.

In keeping with Kaspar's wishes, there will be no service. Donations to be give to the Cancer Research Center, 1200 N. Beaver, Flagstaff, Arizona, 86001. Attention Sabrina. Condolences can be offered to the family at norvelowensmortuary.com.

To plant trees in memory, please visit our Sympathy Store.
Published by Arizona Daily Sun on Oct. 28, 2020.
MEMORIAL EVENTS
No memorial events are currently scheduled.
To offer your sympathy during this difficult time, you can now have memorial trees planted in a National Forest in memory of your loved one.
Funeral services provided by:
Norvel Owens Mortuary - Flagstaff
GUEST BOOK
4 Entries
A great man. He will be missed. Sleep well, Kasper
Michael Gillivan
November 15, 2020
My condolences to Kaspar's family. He was a good man and businessman. ay he rest in peace..
LaVelle McCoy
October 31, 2020
Kaspar was one of God's finest creations. I am so sorry for your loss. May his soul rest in peace.
Susan L Walkup
October 29, 2020
Another pioneer in the real estate industry gone...
Michael Dugan
October 28, 2020