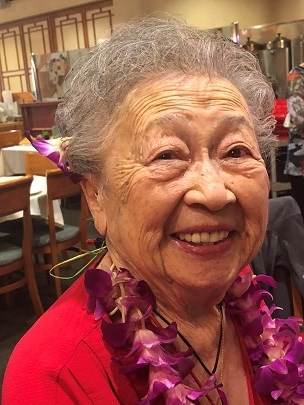 Margaret June Wong Low from Oakland, California passed away in Phoenix, Arizona on April 11, 2021, at the age of 97. She was born June 8, 1923, in Flagstaff, Arizona to Dew Yu and Wong June as the firstborn daughter of nine children; Wong, George, William (Lema), Bob, Edith, Jack, Marjorie, and Jimmy. She graduated from Emerson School, Flagstaff High School Class of '42, and attended ASU. She married her husband Dinny Low of 61 years in Monterey, California where Dinny had his own restaurant and Margaret owned a custom drapery business. Later, they moved to Oakland, California to become grocery business owners. She loved having family and friends surround her, never had an excuse to have a party, and enjoyed a laugh or two. She was an active member in the Oakland Chinatown community as a lifetime member of the C.A.C.A. (Chinese American Citizens Alliance) and the Wa-Sung Service Club. She loved to attend social and dance functions around the Bay Area and play mahjong with the Lucky 12 social group. Upon retirement, she volunteered in the information booth at the Oakland International Airport with the senior volunteer program. She and Dinny traveled the World, many parts of the United States, and cruised the Caribbean, Alaska, Germany (Rhine River), Panama Canal, and eastern coastline of the U.S. into Canada to see the Fall colors. She enjoyed watching sports, especially her San Francisco 49's and Giants baseball team. Margaret is preceded in death by her husband Dinny, her parents, and daughter-in-law Eileen. She is survived by her children; daughter Annette (Chip); sons Ken, Don (Landa), and Winton (Patty); grandchildren Eric (Anna), Kevin, Bryan, Lauren, Ryan, Tyler, Grace, Victoria, and Jackson; and brother Jimmy. Her remains will be returned to Flagstaff and Celebration of Life for both Margaret and Dinny (date of passing 10/19/2019) at a later date will take place in Oakland, California.

Published by Arizona Daily Sun on Jun. 18, 2021.
To plant trees in memory, please visit the Sympathy Store.
MEMORIAL EVENTS
To offer your sympathy during this difficult time, you can now have memorial trees planted in a National Forest in memory of your loved one.
MAKE A DONATION
MEMORIES & CONDOLENCES
0 Entries
Be the first to post a memory or condolences.