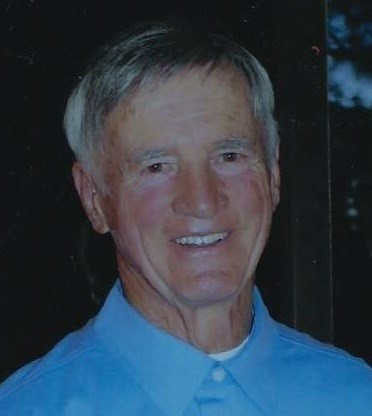 MILTON EVANS, (Milt), died peacefully on Tuesday, November 3, 2020 in Green Valley, Arizona. He was born on June 9, 1929 in Flagstaff, AZ and contributed to the well-being of our beautiful mountain town for the next 82 years until relocating in 2011 to Tubac, AZ.

Milt spent his youth at Morman Lake, AZ raised by his father, Gordon Evans Sr, who owned and operated the Mormon Lake Lodge from 1935 to 1945. Upon reaching high school age, they moved to Flagstaff where Milt attended Flagstaff High School and played football, basketball, and baseball. As a tribute to his athletic achievements, Milt was inducted into the Flagstaff High School Athletic Hall of Fame.

Milt graduated from Arizona State College (now NAU) and then served two years in the U.S. Air Force, after which he taught Business Law and Typing for 20 years at Flagstaff High School and two years at Coconino High School . During his Flagstaff High tenure, he was the golf coach for several years. Milt was also president of the Flagstaff Education Association (FEA) serving to coordinate communication between the Flagstaff Unified School District (FUSD) and the FEA. In 1979, Milt purchased an insurance agency and renamed it Evans Insurance. He enjoyed and was successful as an insurance agent until his retirement in 1996.

An avid hunter, fisherman, and conservationist, Milt in 1957 began his volunteer service with the Arizona Game and Fish Department. He and a few other concerned outdoor enthusiasts organized the first hunter safety education classes in Flagstaff at FUSD schools and training at Fort Tuthill and the McCullough Range. At the time Milt said, "I was driven to ensure that our youth knew the proper handling and safety of firearms, proper training about our outdoors and the ethics and conservation of outdoor resource activity. We strive to teach all we can because we do not want any accidents to occur to any of our students." From 1964 to 1979, Milt was appointed by three AZ governors to serve three consecutive five year terms as an Arizona Game & Fish Commissioner. He served as chairman of the Commission in 1968, 1973, 1974 and 1979.

Milt also enjoyed the sport of golf, becoming a charter member of Flagstaff's Aspen Valley Golf Club and served as Aspen Valley's president for a term. As a testament to his golfing enthusiasm, he may still hold the record for most golf rounds played at Aspen Valley in any season. He and son Randy cherished playing in the Arizona State Father and Son Tournament at the Antelope Hills golf course in Prescott every June for many years.

Milt had a full life and appreciated the long-standing friends and relationships he developed in Flagstaff in both his work and recreational endeavors.

Your family and many friends will remember you, Milt, for your gentle soul and pioneering contributions to Flagstaff's wildlife conservation and forest management. Flagstaff was a great place to live, work and attend Flagstaff Eagle and NAU sporting events. Thank you for your lifelong service to our heaven on earth.

To plant trees in memory, please visit our Sympathy Store.
Published by Arizona Daily Sun on Nov. 14, 2020.
MEMORIAL EVENTS
No memorial events are currently scheduled.
To offer your sympathy during this difficult time, you can now have memorial trees planted in a National Forest in memory of your loved one.
GUEST BOOK
12 Entries
May God bless Milt's loved ones in knowing that he is in a better place and healthy as can be. He was a treasure to all of Northern Arizona and beyond. You are in our prayers. God Bless.
Jon & Tess Cox
November 18, 2020
Mr. Evans, another one of the many great FHS teachers that we had, was a really great guy that i can still see walking down the halls of FHS with a permanent smile on his face. He was a gentle man that reminded me of Mr. Rogers on "Mr. Rogers' neighborhood" on T.V. My condolences to his family.
Pete Perkins FHS Class of 59
November 18, 2020
He taught me to type. Gave Bill and I our first Brittany. I guess when you are born and schooled in Flagstaff, as I was you get to know special people like Milton. He was really special. Helping Bill with our first insurance needs when Bill Started his business. Hey Milton here I am typing a message. Thanks for your schooling.
Nannette Aker
November 18, 2020
God rest his soul! As a member of the class of 1964, I remember Milt as a dedicated teacher whom respected very much. I only had him for one class and that was Aviation Science which fueled my passion for flying resulting in my being a licensed private pilot for 50 years. My condolences to the family.
LaVelle McCoy
November 15, 2020
So sorry to hear about the loss of Milt. He´s the reason I started teaching Hunter Education and I´m now approaching my 44th year. I am grateful for his influence on my life. My sincere sympathy to the family.
Bobby Goitia
November 15, 2020
Milton taught a distributive business class at Coconino High School. He gave me a basic understanding that I used in the office equipment career that I had for 37+ years.
Randy Gould
November 15, 2020
Rest in peace. He would have been a friend of my Dad and Mom. He made the world a better place for passing through it.
Susan L Walkup
November 14, 2020
Milt was a great guy. Never saw him that he didn’t have a smile on his face. Sending our love.
Dave & Joan Cosper
Joan Cosper
Friend
November 14, 2020
May Milt RIP. God bless the family!
JOHN P REILLY
November 14, 2020
Randy, Bruce and your families my condolences for the loss of your dad/Grandfather and Great Grandfather. I met him a couple of times and he was such a nice man. I didn't know of all the life accomplishments, pretty awesome; indeed, a life well-lived. Sending love and hugs to you all.
Kerry Stutzman
November 14, 2020
I always enjoyed golfing with Milt. His cheerful attitude was infectious. It was hard to get mad at yourself for a wayward shot when I played with him.
Richard Guest
November 14, 2020
Milt offered us shelter, friendship and an introduction to the beauty of Flagstaff´s great outdoors when we first arrived in Flagstaff as young and anxious new teachers. As landlord, neighbor and personal advisor, he lent us his family in the absence of our own and gently eased us into introductions to new friends and colleagues. We have always been grateful for these kindnesses.
Bob and Chris Somerville
November 14, 2020