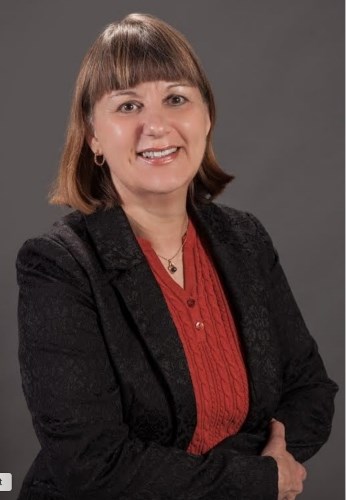 Nadine Gail Barlow passed away on August 17, 2020 after a two-year battle with metastatic ovarian cancer.

A native of San Marcos, California, she was an alumna of the University of Arizona, where she received her Bachelor of Science and Doctoral degrees. After postdoctoral appointments at the Lunar and Planetary Institute and NASA's Johnson Space Center in Houston, Texas, and a professorship at the University of Central Florida in Orlando, Florida (where she was recognized with the 2002 University Excellence in Undergraduate Teaching Award), Nadine came to Flagstaff in 2002 to the (then) Department of Physics and Astronomy at NAU.

In her 18 years at NAU, she ascended the academic ranks, eventually becoming Department Chair of Astronomy and Planetary Science. Nadine was the recipient of numerous awards for teaching excellence. Largely responsible for doubling the size of the Department, she grew its curriculum into a Ph.D.-granting program. Nadine supervised many students over the years, both undergraduate and graduate, and was a popular mentor and friend to those under her tutelage. A prize for Undergraduate Research Excellence is being established at NAU's Department of Astronomy and Planetary Sciences in her name.

She served on the boards and committees of many professional societies throughout her career, and published numerous papers in the scientific literature. Academic outreach was a priority, bringing the Arizona Space Grant Program to NAU, and fostering cooperation between NAU, Lowell Observatory, and the USGS. Right up until two weeks before her passing, she organized scientific meetings and consortia, bringing together scientists from around the world to discuss and collaborate on their findings.

Academically, Nadine specialized in impact cratering processes, particularly on the planet Mars. For her Ph.D. dissertation - almost on a dare - she mapped, measured, and classified every crater on the entire planet larger than 8 km (5 miles) in diameter. These data were used to establish the detailed relative chronology (relative age) of Martian geologic features. Throughout her career, she maintained and expanded this database, as later spacecraft missions returned increasingly detailed images of the planet. Her academic interests spanned impact cratering on planets and satellites throughout the solar system, from Mercury to Pluto. Her curiosity about cratering processes increased along with the reach of our satellite explorations. Asteroid 15466 Barlow is named in her honor by the International Astronomical Union.

Nadine loved her cats, Mexican cuisine, travel, baseball (especially the California Angels), and the geology of Flagstaff. She had a special affinity for Meteor Crater, where some of her ashes were scattered. The rest of her remains will be buried next to her parents in Minnesota. She is survived by her sister, Sharlyn Hayden of Reno, Nevada, and several nieces and nephews and their families.

Throughout her career, Nadine made many lifelong friends, and she will be missed by all of us.

To plant trees in memory, please visit our Sympathy Store.
Published by Arizona Daily Sun on Sep. 1, 2020.
MEMORIAL EVENTS
No memorial events are currently scheduled.
To offer your sympathy during this difficult time, you can now have memorial trees planted in a National Forest in memory of your loved one.
GUEST BOOK
5 Entries
Nadine was my astronomy professor at UCF back in 2000, before she moved to Flagstaff. We became friends (I was an older student) and remained so until I just read this news. My husband and I visited with Nadine in July on a trip to Arizona. I knew she'd been ill and we stayed in touch by email until recently. My thoughts are with the family, and her cats.
Diane Hansen
September 29, 2020
My condolences to her family. I will greatly miss her and her enthusiasm of her life's work and life in general. I am glad she and I knew each other.
ANA GOMEZ
September 6, 2020
She is a wonderful person and will be missed. I am sorry for her loss to all of us who knew and loved her.
Susan L Walkup
September 6, 2020
My condolences to Nadine's family. Nadine was the Associate Director of the Arizona Space Grant Consortium for NAU for the last 12 or so years. She has done so many great things for NAU students and STEM education and outreach in norther Arizona. She is greatly missed. Rest in peace Nadine.
Tom Sharp
September 4, 2020
I worked with Nadine for several years on a Mars dune project and as the Coconino Comm. Coll. rep for her NASA Space Grant program at NAU. She was a wonderful person and colleague...always smiling, always welcoming and always so willing to work with others to see young students achieve success. I will miss her greatly and remember our time together with fondness.
Kevin Mullins
September 3, 2020