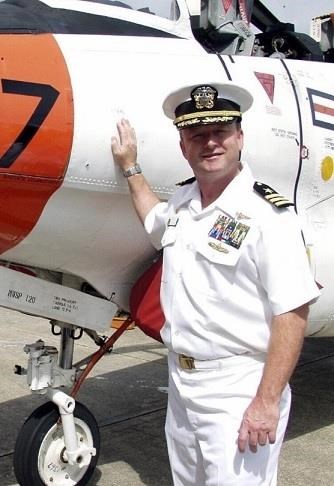 Dr. Paul D. Shankland, a native of Greensboro, North Carolina, graduated from the U.S. Naval Academy in 1983 with a bachelor's degree in pure mathematics. During his subsequent 25 years of active duty, he earned a master's degree in astronomy (with distinction) from the University of Western Sydney, and his Ph.D. in Astronomy from James Cook University. His thesis research was on optical and millimeter radio detections, and dynamic properties of Earth-like planets and Kuiper belts about M dwarf stars.

Upon graduation from USNA Dr. Shankland served aboard USS SELLERS (DDG-11), where he earned his Surface Warfare Officer designation and participated in Persian Gulf protection operations. In 1986 he laterally transferred to the aviation community and earned his wings, becoming an E-2C Hawkeye pilot.

Dr. Shankland served in squadrons aboard the carriers USS FORREST AL (CV-59) and USS GEORGE WASHINGTON (CVN-73), where he served in Desert Storm/Provide Comfort, several subsequent middle-Eastern operations, and in the Adriatic and Kosovo/Bosnia. He was carrier pilot "Top Hook" twice and was nominated the 1991 "Hawkeye of the Year". He also served as an Instructor pilot at VAW-120, and then at Carrier AEW Wing Atlantic.

From 1996 to 1999, and then Commander Shankland served joint interagency Task Force East's Coast Guard admiral for Central/South American special operations. He returned to sea in 1999, joining USS THEODORE ROOSEVELT (CVN71) as the Strike Operations Officer, where he concurrently flew with VF-102 (Tomcats) and HS-11 (Seahawk Helicopter Combat Search and Rescue). In 2001,Paul led the TR war planning effort for its "9/11" response deployment to Afghanistan.

He owned and locally flew a popular red-with-white antique 1939 Waco Cabin Biplane powered by a 300hp Lycoming Radial Engine; a plane reported to have ferried General Eisenhower at one time during WWII.

He is survived by his beloved wife and best friend Amanda Susann Shankland; mother, Karlyn S Shankland; sons, Nick and Rudger both of Denver, CO, five step children, Rodrick, Andrew, Lilly, Wesley and Molly all of Flagstaff, AZ.; sister, Margo Ross; parents-in-law Joe and Liz Haughey, and many other heart's touched throughout his life.

In lieu of flowers consider a worthy cause for a donation, Paul would like to suggest Naval Academy Physics Department Astronomy, or the Fallen Aviators Fund, Commander AEW Wing Atlantic, Norfolk, V.A.

A celebration of life will also be held in Flagstaff, Az. at a later date.

To plant trees in memory, please visit our Sympathy Store.
Published by Arizona Daily Sun on Oct. 27, 2020.
MEMORIAL EVENTS
Oct
27
Celebration of Life
2:00p.m.
WILLIAMS-THOMAS FUNERAL HOME WESTAREA
823 NW 143rd Street, Newberry, Florida
Funeral services provided by:
Williams-Thomas Funeral Homes Westarea
GUEST BOOK
5 Entries
I´m so very sorry to see this sad news Amanda. My most sincere sympathy to you and your family.
Denise Edwards
November 4, 2020
So sorry to hear of Paul's passing. His enthusiasm for flying and life, in general, was obvious. Our thoughts are with you and your family.
Bob and Julie Millis
October 31, 2020
I haven´t seen Paul for many years but I remember him well from his time as one of my students at VAW-120 in Norfolk, Va flying the E-2C Hawkeye. He was a true standout pilot and a great all-around guy. I thoroughly enjoyed sharing the cockpit with him. There was no question he was destined to do great things and he obviously didn´t disappoint. I pray for God´s comfort to his entire family. RIP shipmate.
Tim Leighton
October 28, 2020
I met Paul when his wife Amanda served as General Manager for the Sedona Airport. I remember Paul as exhibiting great vivacity, a tremendous sense of humor, and unending love for his wife and family. Aviation was also one of his great loves. Paul always seemed so down-to-earth in spite of his brilliant mind and stellar accomplishments. Gone too soon. I extend sincere condolences to Amanda and his entire family on behalf of myself and everyone at Sedona Airport.
Pam Fazzini
Acquaintance
October 26, 2020
Paul was one of the finest gentlemen I ever met. He went to our senior prom in his Dress Whites! He will be missed.
Teraesa Whitley Follin
October 25, 2020