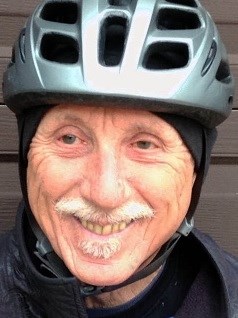 Our dear husband, father and friend. Ray Brutti, left on his next journey on October 2, 2020, at age 74. Ray was a traveler! He took bicycle trips to Europe every summer for over 40 years, with nothing but a bike or a backpack and scant luggage. His wife and daughter sometimes tagged along on such unforgettable experiences. He especially loved France, and he had discovered the wonders of Spain and Portugal in recent years. Bicycles were his life, and happily, his work. His daily routine included long rides and coffee at Macy's, where he was a fixture. Just walking about town he was constantly hailed "Hey!!! Cosmic!" "Hey Ray!!" He made connections wherever he went.

Ray authored 3 popular trail guides on biking and hiking in Flagstaff, Sedona and Phoenix. He was very proud of being his own boss, except for a formative stint at Cosmic Cycles bike shop. He was a gear-head and a righteous wrench who could fix almost anything, including stuff around the house, his bikes, and vintage BMW motorcycles. A pro problem solver, he saw the world in a different way. He had creative solutions for any issue.

His wife of over 40 years (Marcia Wiesner), our daughter (Elena Brutti), his cousins and his many friends worldwide are heartbroken at the loss our warm-hearted, totally original friend. May his adventurous spirit and open heart live on, long after he is gone. We like to think that he just exploded out into the universe in the end, becoming the Cosmic Ray he was always meant to be.

Published by Arizona Daily Sun on Oct. 14, 2020.
To plant trees in memory, please visit the Sympathy Store.
MEMORIAL EVENTS
To offer your sympathy during this difficult time, you can now have memorial trees planted in a National Forest in memory of your loved one.
MAKE A DONATION
MEMORIES & CONDOLENCES
8 Entries
Wow, Cosmic Ray! It was on that first visit to Macy's Coffeehouse in 1993 when his bright green mountainbike trail guide caught my eye, its pages filled with humorous artistry and random wisdom...SOLD! What was going to be just a day in FLG turned into two weeks of riding and getting lost, so Ray's guide truly launched my love for Flagstaff and many many years of riding its trails. After a proper Macy's breakfast, of course! My favorite Cosmic Ray witticism: "FINALLY, it's fine to be weak of physique or lame of brain, but if you be thin of grin please stay safe at home. Thank you!" Godspeed Ray, and all who loved him.
Ricky J
March 6, 2021
It is with sadness to hear of Ray's death. I enjoyed his conversations. I enjoyed his observations.
Clinton Ponder-Gilby
December 10, 2020
Your expressions of Rays life brought a smile and happy memories for our dear neighbor. Our deepest condolences are with you Marsha and Elena. God´s blessings to you. Judy and Kit
Judy and Kit Kuykendall
October 25, 2020
My brother-in-law Ray was very special outdoorsman but also a successful author, businessman, and a pretty good mechanic. I never see a bicycle without thinking of him. We've lost Cosmic Ray, but we'll treasure his memory the rest of our lives.
Gerald Nordley
October 24, 2020
I will miss seeing him zipping through Flagstaff on two wheels. Ray always made me think what cool, unique town I live in where certain individuals help create a "tapestry" of a place.
He was truly a local fixture, Gods Speed Ray.
You will be missed.
William Mulkey
Friend
October 16, 2020
Never had the chance to meet Ray, but wow do I feel in debted to what he did for the AZ Mountain Bike Community. He paved the way in so many trail systems that brought so much happiness to people. Those systems also grew because of his books. Thank you Ray. You left one impressive legacy.
Shawn Stenmark
October 15, 2020
Ray was the crusty outdoor dad I never met. His books with their not-always-accurate maps and commentary were a great intro to the outdoors in Arizona. Ride in Peace Ray.
Scott Nowacki
October 14, 2020
Cosmic Ray got me into mountain biking in 1984. He was a wonderful advocate of the sport and a truly unique individual. Shine on Cosmic.
Chip McCray
October 14, 2020
Showing 1 - 8 of 8 results