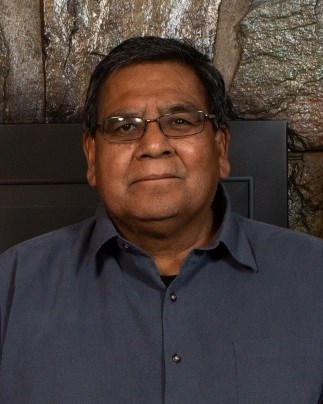 Thomas (Tommy) R. Hernandez passed away peacefully with his wife, MaryMargaret Goitia Hernandez, and their children by his side on March 28, 2021 after a courageous battle with cancer. Tommy was born to Tom and Rosie (Rodriguez) Hernandez on September 1, 1951 and was a native of Flagstaff.

Tommy was a graduate of Flagstaff Unified School District and Northern Arizona University (NAU). He lived a life of service to his community, both in his professional life and through many of his volunteer activities. He worked as a juvenile and an adult probation officer for over 30 years. Tommy has many friends and is well respected in his career field. In his early working years, he worked at Jeld-Wen, NACA, and Chicanos Por La Causa. He was very active at San Francisco de Asis Catholic Church serving in jail ministry, Knights of Columbus, and the Friday Morning Men's Group. Additionally, he served in the state prison ministry in Winslow. He served on the Coordinating Council on Mexican American Affairs (CCMAA) in which he was a member, officer, and on the scholarship committee. He was a long-standing member of AA and proudly touched the lives of many. His home group was The Acceptance Group.

Tommy also loved sports and was a huge fan of the Diamondbacks, Suns, Cardinals, Raiders, Flagstaff High School Eagles and NAU Lumberjacks. His many hobbies included collecting baseball cards, antiques, glass burritos (donkeys), and sports and Coke memorabilia. He also had an extensive Avon Collection. Tommy enjoyed researching local history and political issues. Tommy was a big movie buff and one of his greatest joys in life was going to the movies with his kids and grandkids. He also enjoyed coaching youth sports for his children and playing and coaching adult softball. His true passion was Kyokushin Karate. He was a Sensei for the Flagstaff Karate Club, and well respected in the martial arts community.

He is survived by his mother, Rosie Hernandez, his loving wife MaryMargaret Goitia Hernandez and four beautiful children, Tommy, Ambrose, Andrea, and Santana. He is survived by his siblings Rosemary (Robert) Gonzales, Robert, Juanita (Felix) Carrillo, and Edward (Juanita). He has four grandchildren Christopher, Cayden, Natalie and Gabriella, and numerous aunts, uncles, nieces, nephews, cousins, and friends. He was preceded in death by his father, Tom C. Hernandez, his maternal grandparents Juan and Juana Rodrigues and his paternal grandparents Jose and Alejandra Hernandez.

Visitation will be Monday, April 5th from 6-8pm at Norvel Owens Mortuary. Holy Rosary and Mass will be Tuesday April 6th at San Francisco de Asis Catholic Church starting at 10:00 am. Attendance is still limited at the church so the service will also live streamed on the church's Youtube. Interment will follow at Calvary Cemetery. Memories and condolences can be shared with family online at www.norvelowensmortuary.com

To plant trees in memory, please visit our Sympathy Store.
Published by Arizona Daily Sun on Apr. 4, 2021.
MEMORIAL EVENTS
Apr
5
Visitation
6:00p.m. - 8:00p.m.
Norvel Owens Mortuary
914 E. Route 66, Flagstaff, Arizona 86001
Funeral services provided by:
Norvel Owens Mortuary - Flagstaff
GUEST BOOK
Sponsored by Norvel Owens Mortuary - Flagstaff.
6 Entries
My deepest condolences to Mary Margaret, to the family and friends. May God shine his light upon you.
Kerry Davis Stutzman
April 9, 2021
Mary Margaret, My heart and love goes out to you at this difficult time. Know you and family are in our prayers. May Tommy rest in the arms of our Lord.
Lyndella Bauchman
April 6, 2021
Mary Margaret and family, my deepest condolences along with my prayers, that you find comfort in knowing that he is no longer in pain.
Kathy Castillo Lozania
April 6, 2021
God gained another angel. I know Tommy will watch over us. He was always so kind, lovable, and never had a bad thing to say about anyone. He will be dearly missed. Our prayers go out to his family to help them get through this time. We miss and love you... Till we meet again...
Richard & Stephanie Alonzo
April 6, 2021
Ambrose, So sorry for your loss of your father. May your love and memories of him bring you joy. Big hug for you.
Dolores Cordova
April 5, 2021
Robert, and Hernandez Family, I am saddened to hear of your loss. My thoughts and prayers are with you. Faith be with you now and always.
Jo Ann Garcia
April 5, 2021