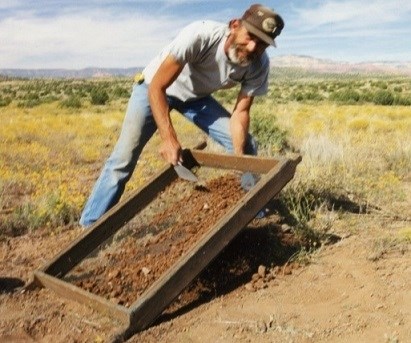 Walter George Gosart, 73, of Flagstaff passed away Nov 11 after a short battle with cancer. He was born in Wilkes-Barre, Pa., the son of Walter and Margaret Gosart, of Shavertown PA. He attended Penn State University, majoring in chemistry.

Walter moved to Flagstaff in 1993, and became an integral part of the educational, non-profit Elden Pueblo Project, under the auspices of the Arizona Natural History Association and Coconino National Forest. He also worked as an archaeological technician on the Highway 89 expansion, and for the National Park Service where he was based primarily at Wupatki National Monument.

Walter's love of archaeology and education touched thousands of students at Elden Pueblo and the Museum of Northern Arizona for almost 30 years as he, along with co-instructor Tom Woodall, emphasized the importance of cultural preservation, site etiquette, and appreciation of the past. He presented a formal paper on this topic at a Society of American Archaeology meeting in Seattle, Washington, expressing how important archaeology was to his life.

Walter's knowledge and experience has been a core aspect of the Elden Pueblo program ever since the Pennsylvania native on a vacation walked up the Elden trail in 1992 and asked, "What's going on here?" He never left!

Walter's contributions on many levels simply can't be measured. He was very passionate about archaeology and loved to share his knowledge with students and the general public. Walter's influence is in every component of the program, designed to foster stewardship of cultural sites and appreciation for past societies, and he excelled in conveying the values of archaeology and science to students.

Walter was an integral part of the Coconino National Forest and Museum of Northern Arizona's NAGPRA compliance initiative, identifying and documenting artifacts to current professional standards for repatriation to the Hopi and Zuni. As a volunteer, Walter also led survey crews for the Coconino National Forest, providing new information to better understand the strategies indigenous people developed to flourish in Arizona's challenging natural environment.

Most recently, Walter assisted and trained a dedicated group of volunteers at the Museum of Northern Arizona and the Verde Valley Archaeology Center, Camp Verde, specializing in ceramics analysis and documentation of artifacts from Elden Pueblo, Honanki, Palatki, and other sites on the Coconino National Forest.

He is survived by his many friends in the archaeological community of Flagstaff and the Verde Valley. Donations in his memory may be made to the Museum of Northern Arizona, the Verde Valley Archaeology Center or the Olivia White Hospice House. Appreciation is extended to the Olivia White staff for their exemplary care and compassion. Arrangements are under the direction of Norvel Owens Mortuary; a memorial gathering will be organized at a later date.

To plant trees in memory, please visit our Sympathy Store.
Published by Arizona Daily Sun on Nov. 17, 2020.
MEMORIAL EVENTS
No memorial events are currently scheduled.
To offer your sympathy during this difficult time, you can now have memorial trees planted in a National Forest in memory of your loved one.
Funeral services provided by:
Norvel Owens Mortuary - Flagstaff
GUEST BOOK
2 Entries
Every day we think of how much we miss your wit, compassion, work ethic and humor. Your contributions were many in this world, and enduring. Rest in peace, dear friend!
Peter and Anne
November 19, 2020
Rest in peace, your worldly problems are now over. We will miss your knowledge, wit and friendship.
Cathy and Tom Weimer
November 17, 2020