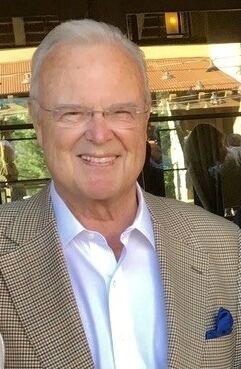 William Sims Jump, 78, known as both "Bill" and "Skip," passed away peacefully surrounded by his family on January 14 in Cottonwood, Arizona.

Born February 28, 1942, in Corsicana, Texas, he graduated from Denver South High School in Denver, CO, (1960). He attended the University of Colorado (CU) where he played football and was active in the Delta Tau Delta fraternity. He received his degree in Business (1965).

Bill was preceded in death by his wife Patricia ("Pat") Hickey Jump, whom he met in college and was married to for over 50 years. After college, Bill accepted a position with Cummins Engine Company. His 18-year career with Cummins took his family to 4 states and overseas to São Paulo, Brazil. This was a startup joint venture for Cummins and was viewed as both a diplomatic and business success.

After Cummins, Bill became involved in energy, manufacturing and real estate businesses in Ohio. He helped start Dec Investment Group (DEC), a multifamily real estate investment company that expanded across 6 states, including Arizona. He was introduced to Sedona through one of their investors.

After DEC sold its portfolio, Bill and Pat moved to Sedona, Arizona. In Arizona he became acquainted with Out of Africa Wildlife Park in Phoenix, and he helped move the operation to Camp Verde. As a result, he became one of its owners.

Bill was very active in his community. He was a founder of VVREO, a member of Sedona 30 and sat on the Board of the Fine Arts Museum of Sedona.

Those who knew Bill described him as well-liked, fun to be around, a community activist, and a great father, husband, brother, uncle and friend; a true gentleman and a giving person. He was known in the Sedona and surrounding Verde Valley communities as an innovator and visionary at heart, who also had determination, dedication, passion and motivation. He will forever leave an impression on those who knew him and worked with him.

Bill's vision and steadfast commitment has been credited with aligning the necessary local and state officials to expand Hwy 260 between I-17 and 89A, positioning the 260 corridor for various development projects.

Due to COVID-related restrictions, there is currently no public service planned; however, the family does plan to hold a Celebration of Life service in Sedona, at a future time and place to be determined.

In honor of William "Bill" Jump, a donation can be made online to Sedona 30, a charitable service association, at www.sedona30.org/contribute/, in William S. Jump's name to further the outreach that is done to improve the quality of life to those in the Sedona community. Contributions also can be made to Out of Africa – Contribution Bill Jump Memorial, at 4020 N Cherry Rd, Camp Verde, AZ 86322. This will help cover veterinary expenses and animal rescue operations.

To plant trees in memory, please visit our Sympathy Store.
Published by Arizona Daily Sun on Jan. 29, 2021.
MEMORIAL EVENTS
No memorial events are currently scheduled.
To offer your sympathy during this difficult time, you can now have memorial trees planted in a National Forest in memory of your loved one.
Funeral services provided by:
Westcott Funeral Home - Cottonwood
GUEST BOOK
0 Entries
Be the first to post a memory or condolences.