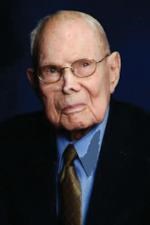 Alvin attended local schools and graduated from UCLA in 1944 with a B.A. degree in geology. This was followed by military service in the Army in the European theater during VIM/ II, 1944-1946. After his military service, Al returned to Bakersfield where he began a career in the petroleum industry that lasted over 70 years. He was employed by the Superior Oil Co. as a micro-paleontologist from 1946-1959, and by the Union Oil Co. as a micro-paleontologist and geologist from 1959-1986. From 1986-2018, until the age of 98, he continued working as a consulting micro-paleontologist and geologist for the petroleum industry.

During his career, he published thirteen paleontological and geological papers on fossil foraminifera and the stratigraphy of sediments in the San Joaquin and Sacramento Valleys of California. For over 65 years he was a member of the American Association of Petroleum Geologists. He was a past president of the Pacific Section Society of Economic Paleontologists and Mineralogists (1962) and elected to Honorary Membership in that same society in 1979. He was a past president of the San Joaquin Geological Society, received the President's Award of the Pacific Section American Association of Petroleum Geologists in 2010, and Honorary Life Membership in that association in 2013.

On June 29, 1941, Al married Erva Bernice White, also a native of Bakersfield. They were blessed with three fine sons, Gerald, Darrell, (who passed away in 2014), and John. They enjoyed almost 70 years of happy married life until Erva's passing in 2010.

Alvin's desire in life was to exemplify the teachings of Christ. He first attended the Bakersfield First Church of the Nazarene at two weeks of age with his parents and brothers, accepted Christ as his Savior at the age of eight, and later became a member of the church. He was very active in the church throughout his lifetime, serving in various capacities of leadership for many years including church board member, Sunday School Superintendent, and building committee member. Al, his wife Erva, and their three sons were active and supportive members of the church and its cause to present the gospel of Christ. In recent months Al still attended church when possible and last attended on his 100th birthday, February 23, 2020. He was a true man of God, with integrity and humility, and will be missed by all who knew him.

Visitation for Alvin will be held at Greenlawn Northeast on Friday, May 15, 2020, from 4:00- 8:00 pm and a graveside service will be held at the same location Saturday, May 16, 2020, at 10:00 am. In lieu of flowers, those wishing to remember Alvin can donate to the Bakersfield First Church of the Nazarene or a charity of their choice.

Due to the current health restrictions, a memorial service for Alvin will be held at a later date.

Published by Bakersfield Californian on May 14, 2020.
To plant trees in memory, please visit the Sympathy Store.
MEMORIAL EVENTS
May
15
Visitation
4:00p.m. - 8:00p.m.
Greenlawn Northeast
CA
May
16
Graveside service
10:00a.m.
Greenlawn Northeast
CA
MAKE A DONATION
Please consider a donation as requested by the family.
MEMORIES & CONDOLENCES
8 Entries
I was lucky enough to have Al as my mentor when I started with Union Oil Co. in 1976 right out of college. Al was one of the most decent, honest and knowledgeable human being that I've ever met. The devotion that he kept for his family and church was also mirrored in all of his work processes at the office. Love, passion and honesty was informed in all of his work: Detailed examination of samples for age diagnostic fossils, long hours correlating paper e-logs and focused hunts for sediment in the field that helped unravel the correlation of California stratigraphy for both the petroleum industry and academia. The list of his coworkers, students, professors and geoscientists who depended on his knowledge of California stratigraphiy is too long to include here.
Al, the man, is loved by us all and his geologic and biostratigraphic legacy will be remembered long after we're all gone.
Mark Filewicz
Friend
June 22, 2020
The Almgrens and Reimers went to First Church Of The Nazarene together for many years, Al was a man of God and always friendly to all.
Ken Reimer
Friend
June 18, 2020
Alvin's life will be remembered in a time of reflection and rememberance on Saturday, June 20, 2020 at 11 in the morning at First Church of the Nazarene, 2801 Hughes Lane, Bakersfield, California. (assuming that this is still a possiblity due to CoVid 19 restrictions.)
I was so fortunate to have had such an amazingly humble and Godly man for a very close uncle. He was passionate about his God, his family, his "rocks and fossils" and talking to people about his faith. His legacy will live on in the many lives he very gently touched.
Myrna May
Family
June 13, 2020
Al was an incredibly generous mentor to me over the first forty years of my career. I knew nobody better to talk through complicated geological and biostratigraphic problems. But even more worthy were his carefully considered arguments that belief in God and a belief in science were completely compatible. He made a convert out of me and many others, and there is no better testimony to your worth in this world, and to God. I'm looking forward to further discussions with Al, once we are both up top.
Mark Boehm
Coworker
May 28, 2020
A true man of God. Al was so kind to our family and Im so happy I got to say hi a few years back at Winona Swens funeral. John played the piano for her service which brought back wonderful memories of his playing at my wedding in 1980. Most importantly Al and Erva raised a fine son and my Church of the Nazarene memories are forever cherished. Thank you Al for being a fine example of Christs love.
Nancy Starr Parker
Acquaintance
May 25, 2020
What an inspiration of a good Christian man.
Patricia
Acquaintance
May 17, 2020
Al was a wonderful geologist and a true gentleman. He was assisting Oxy into his 90's and an inspiration to many younger geologists who learned that not all knowledge is on a screen. Condolences to his family.
Bob Stupp
Coworker
May 17, 2020
Al and his family have been good friends for 44 years. He was always easy going and very helpful when his help was needed. Al will be missed as is his brother George.
Ken Mitchell
May 14, 2020
Showing 1 - 8 of 8 results