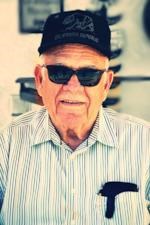 Charles "Lawton" Jiles was born on December 16, 1929, in Sallislaw, Oklahoma. He was the oldest child of Jess and Tressie Jiles. He had two brothers, both preceding him in death, John & Jess (JR) Jiles and two sisters, Cathleen and Emogene. Lawton as a young child and his parents, like so many from Oklahoma, migrated west, eventually settling in Richgrove. Lawton attended high school in Delano. Eventually, Lawton played in a band with his brother John and cousin Richard Chaney called The Valley Rhythm Boys. Together they played numerous dance halls, saloons, and Honky Tonks throughout Bakersfield and the central valley. Lawton eventually signed a record deal as a singer with King Records. He worked closely with Buck Owens and served as Buck's band leader for several years, and he worked at one point. Other artists Lawton worked with include, Merle Haggard, T. Texas Tyler, George Jones and many others.

During the Korean War, Lawton served in the Air National Guard. During this time Lawton had two sons with his first wife, Melba "Jo." His sons, Jerry and Kenny, sadly preceded him in death. Jo's brother, Charles "Buster" Beam, became a lifelong song writing partner to Lawton. Together, they wrote numerous songs. Six of these songs were recorded by the iconic country music legend, Patsy Cline. Their biggest hit, "Let the Teardrops Fall," was written while on a camping trip in Yosemite. Let the Teardrops Fall has been used in numerous television shows, including Northern Exposure and The Sopranos. All six of their songs were certified platinum (sales over 1,000,000) by the Recording Industry Association of America.

Lawton eventually moved to the Inland Empire and focused his time and energy on raising his family. He began a second career in the bookkeeping and income tax field. In the 1978 he and his second wife Ruth, formed Vista Business Service in Upland California. What started at their kitchen table blossomed into a booming success which continues today. Lawton and Ruth created numerous jobs for professional bookkeepers and fostered client relationships that became lifelong friendships in many cases. During this time Lawton fathered two more sons; Casey Jiles a lieutenant with the San Bernardino County Sheriff's Department; and Dr. Michael Jiles a professor at Taft College.

Lawton and Ruth remained married until Ruth passed away in 2017. Lawton is survived by his two sisters, his two sons, two step daughters, numerous cousins, nieces, nephews and an amazing 15 grandchildren as well as 9 great grandchildren.