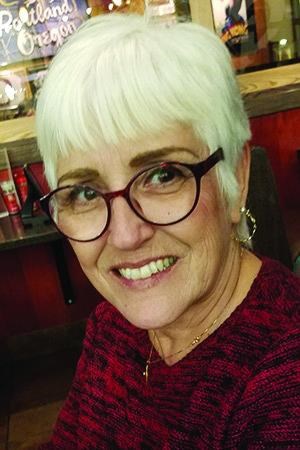 Christine Faz (Gonzales) went home to walk the streets of gold with our Lord on September 27, 2021. Chris was the 10th of 11 children born to Arturo and Rebecca Gonzales. She was the "baby girl" of seven sisters. She spent her childhood in Palmdale and Bakersfield. After graduating from South High School in 1969 she attended Bakersfield College, where she majored in Early Childhood Development.

She met her husband, George Faz, when he agreed to buy a dance ticket from her with the stipulation that she go to the dance as his date. The two married in 1970, shortly before he was drafted to Vietnam. They welcomed a daughter, Rita, in 1973 and 4 years later a son, Adam.

Chris was a devoted and loving wife and mother. She was a faithful child of God and had an active prayer life and shared that with her family. After God, her family was her priority. She was a homemaker and an amazing mother who put her children first. She made it a point to volunteer and attend every event of theirs and her husband's. She was highly involved in their schools as a volunteer and was well known by other students and school staff.

When her children were old enough, Chris began her career as a preschool teacher. Over her 25+ year career she was known as "Miss. Chris" to her families at Canyon Hills Assembly of God, NOR Sears Park, Head Start and BCSD. Chris truly enjoyed working with children and made a huge difference shaping numerous young lives.

She was loving and supportive to her grandchildren who were blessed to have her as their "Grams." Just as with her own children, she was their biggest supporter and never missed an event. She loved her family and spending time with them in Las Vegas, attending concerts, the movies, shopping, and traditions such as spending holidays at Disneyland, attending the Veterans Day Parade, attending the Strawberry Festival in Arroyo Grande and singing oldies and Christian songs, taking photos and making videos with her granddaughter. The beach was her favorite place to be. She loved waking up before sunrise and walking along the shore collecting sand dollars and seashells.

Aside from being baptized and accepting Jesus Christ as her Lord and Savior, two of her proudest accomplishments, were her family and returning to school and earning her Associates Degree from Bakersfield College.

A Celebration of Life will be held Monday, October 25 at 8:00 a.m. at Hillcrest Memorial Park with graveside services to follow.

Due to COVID 19, the family kindly requests that guests please consider the safety of all in attendance and take proper precautions.

www.bakersfield.com/obits
Published by Bakersfield Californian on Oct. 21, 2021.
To plant trees in memory, please visit the Sympathy Store.
MEMORIAL EVENTS
Oct
25
Celebration of Life
8:00a.m.
Hillcrest Memorial Park
CA
MAKE A DONATION
MEMORIES & CONDOLENCES
4 Entries
Rita, I´m so sorry for your loss. I just lost my sister on the 21st of Oct. Now they are home with the Lord.
Anna Stumbaugh
October 25, 2021
My condolences to the Faz and Gonzales family.
Linda Murillo Guerra
Friend
October 24, 2021
I have so many happy memories of Chris, Rachel and I hanging out when were in high school. Chris was and always will be an amazing person and friend. I remember her beautiful smile and happy personality. My deepest sympathy and love to all her family...... Rachel my friend you and Chris are in my heart forever... I'm so sorry for your loss...Love You.... your forever friend, Virginia
Virginia Maldonado Ruff
Friend
October 21, 2021
george sorry for your loss Jamie Swidecki and Linda Swidecki
jamie swidecki
Work
October 21, 2021
Showing 1 - 4 of 4 results