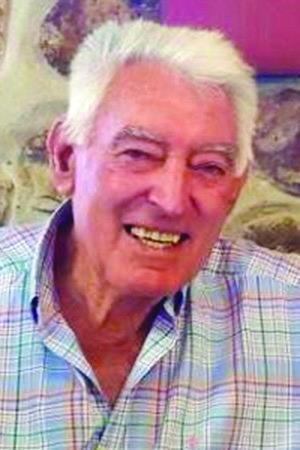 Miguel was born on March 3, 1935, in Lekaroz, Navarra, Spain. He was the eighth of fourteen children born to Francisca Goi and Bautista Iturriria. Miguel grew up in his beloved family home of Ortiborroa, in Lekaroz. Miguel developed his strong work ethic early on when he would get up with Aitatxi before dawn and herd livestock into the green mountains surrounding Lekaroz. He graduated from the Colegio de Lekaroz, sang in the choir, and was an altar boy in his youth.

In November 1952 at the age of 17, Miguel, along with his brother Paco, left his family and homeland and immigrated to the United States to pursue his dream of a better life and more opportunity. Miguel and Paco arrived in Bakersfield, CA and joined their oldest brother Andres, who had paved the way for their employment with M&R Sheep Company. Miguel herded and tended sheep for six years. He lived in trailers and trailed sheep through the desert and into the high country of the Eastern Sierra mountains by foot or donkey for many years, accompanied by his dog. He enjoyed that time and because of it he always had a greater appreciation for what the sheepherders did. In 1958, Miguel, Andres and Paco started I&M Sheep Company with Joe Mendiburu. Their partnership flourished for 25 years, continuing into the 1980's when the three brothers began operating the business on their own. Two additional brothers, Fernando and Antero, also immigrated from the Basque Country, and first worked for I&M before forming their own business, A&F Sheep Company. The legacy of I&M Sheep Company continues today and has included cattle, farming, and of course, sheep.

One night in the mid-1960's, while Miguel was on a date at Woolgrowers, he met Yvonne Echenique, daughter of sheep rancher Joe Echenique. The two would go on dates whenever Miguel came to town. On September 6, 1969, Miguel and Yvonne were married in Las Vegas, Nevada. They settled in Bakersfield, CA, and were blessed with four daughters: Suzy, Trisha, Nikki, and Crissy.

One of Miguel's proudest moments was becoming an American citizen (thanks to the support of Marcelina Mendiburu). He remained an avid supporter of the Basque culture and was an honorary member of the Kern County Basque Club. He took pride in celebrating the culture, faith and traditions with his family and friends. He loved the picnics where he could catch up with old friends and make new ones, play in mus tournaments, dance, and watch the pelota games held at the club. He was also a lifetime member of the California Woolgrowers Association and the Kern County Woolgrowers Association. Miguel was a longtime parishioner at Christ the King Catholic Church. He was also a proud supporter of his daughters' and grandchildren's sporting adventures.

www.bakersfield.com/obits
Published by Bakersfield Californian on Jul. 25, 2021.
To plant trees in memory, please visit our Sympathy Store.
MEMORIAL EVENTS
Jul
27
Rosary
9:30a.m.
St. Francis of Assisi Catholic Church
900 H Street, CA
Jul
27
Funeral Mass
10:00a.m.
St. Francis of Assisi Catholic Church
CA
Funeral services provided by:
Doughty Calhoun O'Meara
MAKE A DONATION
Please consider a donation as requested by the family.
MEMORIES & CONDOLENCES
Sponsored by Doughty Calhoun O'Meara.
3 Entries
My most sincere condolences for your loss. I was fortunate to have met Miguel a couple years back in Baztan. I hail from the same town of Lekaroz, and have to say that the Iturriria´s have always been kind, generous, honest and very well respected. Goian Bego Miguel!
Iñaki Idoate
Other
August 1, 2021
I grew up with his nephew John M. Iturriria.
James Smith
Family
July 27, 2021
My condolences to Miguel's family, I have many good memories of Miguel and Paco at the Basque dances and I remember see him and Yvonne at mass at Christ The King every time I was in town. My prayers are with you Yvonne, Mary Jo
Mary Jo (Ansolabehere) Norris
July 26, 2021
Showing 1 - 3 of 3 results