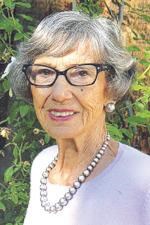 Olly Zangerl was born in Innsbruck Austria to Rudolf Zangerl and Emma Pircher Zangerl on April 12, 1928. She attended the University of Innsbruck and later was a statistician for the Government of Tirol, Austria. She met her American husband C. James Blom while he was earning his PhD in geology at the University. They were married in 1953 and moved to America. Jim was immediately drafted into the army and the couple moved to San Francisco where he was stationed at the Presidio and Olly worked for the Metropolitan Life Insurance Company. Their first child, Monica was born in 1955.

After leaving the Army, Jim began work for Standard Oil of California (now Chevron) in Ojai, CA. In 1957, their second daughter, Christine was born. They were then transferred to Whittier, and in 1961 to Bakersfield where Olly made many friends and fell in love with the community. In 1963, they welcomed the arrival of their third child, Karin.

After Jim was hired by Occidental Petroleum, the family moved to Tripoli, Libya for three years (before Ghadafi's takeover). Each summer Olly would take the girls to spend time with her mother in Innsbruck.

Returning to Bakersfield in 1969, she and her husband settled into the day to day life of raising a family, this time in Olde Stockdale.

In 1973 Olly enrolled at California State University, Bakersfield where she graduated with a degree in Social Studies. She earned a teaching credential and substituted for several years at local high schools.

Olly loved to play tennis and still golfed into her late 80's. In addition, she adored playing bridge and duplicate bridge at the Bridge Center. She enjoyed reading, swimming, skiing and gardening. Traveling the world and vacationing with her family were always big favorites of hers.

Over the years, Olly contributed countless hours to various charities and organizations. She was one of the early members of the Child Guidance Guild. She volunteered for several years at the Guild House. Along with several of her friends, Olly helped start the Blue Ribbon Circle which supports the Bakersfield Museum of Art. She was on the YMCA board and for decades fundraised diligently for Bakersfield Community Concert Association.

A Memorial Mass will be held for Olly at Saint Francis Church in Bakersfield at 11 A.M. Tuesday, May 29, 2018.

Published by Bakersfield Californian from Mar. 28 to Mar. 29, 2018.
To plant trees in memory, please visit the Sympathy Store.
MEMORIAL EVENTS
To offer your sympathy during this difficult time, you can now have memorial trees planted in a National Forest in memory of your loved one.
MAKE A DONATION
MEMORIES & CONDOLENCES
4 Entries
I just learned the sad news. It was always a pleasure to meet with her or see her and Jim at events for CSUB or Arts Council of Kern. Always so upbeat and with great stories!! Her memory is a blessing.
Laura Wolfe
April 30, 2018
We are so "lonesome" for Olly's great smile, gentle laugh and sparking eyes. Jim and family may you know she "touched us" deeply. Love John and Brenda
April 28, 2018
I am so sorry for the loss of your loved one. Please find peace and comfort in Psalms 119:76
March 29, 2018
I'm so sorry to hear about Olly. Our thoughts are with all of you Jim, Moni, Christine and Karin. With love, Ninette, Mike and Geoffrey Brintz
Ninette Brintz
March 28, 2018
Showing 1 - 4 of 4 results