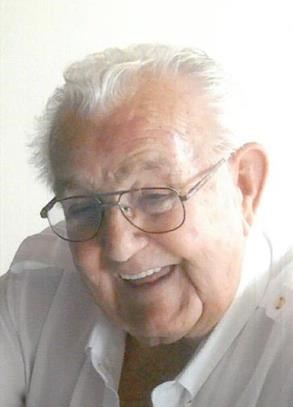 FUNERAL HOME
Harkins Funeral Home Inc
600 Main Street
Delta, PA
Homer H. Jones, 95, of Bel Air, MD, died on Sunday, October 10, 2021 at the Senator Bob Hooper House, in Forest Hill. Mr. Jones was born to the late Marshall Jacob Jones and Helen (Ross) Jones. He was married to his childhood sweetheart, Doris Mae Jones, until her death in 2004. Homer was a lifelong resident of Harford County. He left only to serve his nation during World War II and then returned following his service. Homer worked as a welding foreman at the former Wiley Manufacturing Shipyard in Port Deposit. Homer will be remembered as an opinionated, hardworking man who enjoyed horseracing and visiting casinos. He was a skilled craftsman, who built his family's home with his own hands. Homer was a man of faith and worshiped at Delta United Methodist Church, prior to its closing. Homer is survived by his children: Carol (Eugene) Grafton, of Whiteford, MD, Shirley Clark, of Rome, GA, and David A. (Deborah) Jones, of Bel Air, MD; and a brother, Robert Jones. Five grandchildren, six great-grandchildren and one great-great grandchild will continue the legacy that Homer began so many years ago. In addition to his parents and late wife, Homer was predeceased by one brother and one sister. A private graveside inurnment will take place at the convenience of the family. Pastor Donald Rowe, of Mt. Nebo United Methodist Church will officiate at the graveside service. Arrangements have been entrusted to Harkins Funeral Home, Inc., of Delta, PA.
Published by Baltimore Sun on Oct. 15, 2021.
To plant trees in memory, please visit the Sympathy Store.
MEMORIAL EVENTS
To offer your sympathy during this difficult time, you can now have memorial trees planted in a National Forest in memory of your loved one.
Funeral services provided by:
Harkins Funeral Home Inc
MAKE A DONATION
MEMORIES & CONDOLENCES
Sponsored by The Baltimore Sun.
0 Entries
Be the first to post a memory or condolences.