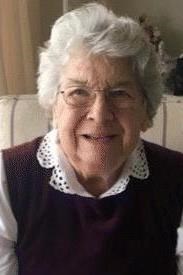 Upon graduation from Strayer's Business College, she worked as medical secretary to Alan Churchill Woods, MD, director of Wilmer Eye Institute at Johns Hopkins. After marrying William Duggan, she embarked upon what proved to be her most treasured role. In her words, "My only claim to glory is that I loved being a wife and mother, and enjoyed life here on earth." She took great pride in her daughters, sons-in-law, grandchildren and great-grandchildren. In her middle years, she re-entered the workforce as office manager for local ophthalmologist Martin Lipson, MD.

Well-known both for her hugs and her hospitality, Mrs. Duggan welcomed family, friends and neighbors -- even the occasional stranger -- to the family dinner table. She was a mother figure to many of her daughters' friends, who remember her fondly.

Mrs. Duggan was a member of St. John the Evangelist Church where she served in many roles including Prefect of the Sodality of the Blessed Virgin, and Regent of the Catholic Daughters' Court of St. Elizabeth Ann Seton #278. She played the organ and the piano.

Late in life, Mrs. Duggan found time to develop her gifts as a watercolor and sketch artist, working primarily in charcoal, pastels and watercolor. Her work was featured in exhibits of local artists at the Delaplaine Art Center and Buckingham's Choice. She was a motivated learner, an avid reader, and after her retirement took community college courses. Other hobbies included writing poetry, gardening, baking, and crocheting.

Gifts in her memory can be made to St. John Cemetery Endowment Fund or the Frederick Soup Kitchen c/o Frederick Community Action Agency.

Funeral services are private due to the coronavirus pandemic, followed by burial in St. John Cemetery.

Arrangements by Keeney Basford P.A. Funeral Home.
Published by Baltimore Sun on Jan. 19, 2021.
To plant trees in memory, please visit the Sympathy Store.
MEMORIAL EVENTS
To offer your sympathy during this difficult time, you can now have memorial trees planted in a National Forest in memory of your loved one.
Funeral services provided by:
Keeney & Basford P.A. Funeral Home - Frederick
MAKE A DONATION
MEMORIES & CONDOLENCES
Sponsored by The Baltimore Sun.
5 Entries
Mary Jane was a long time friend. I worked with Bill and enjoyed many fun times at their house. When I lived in Frederick I visited Mary Jane at Buckingham's every month at Mass. She was a wonderful lady and I send our condolences and prayers to all the family.
Nancy Hendrickson
Friend
January 22, 2021
Mary Jane Duggan was a great lady who shared her home, her talents, her encouragement, and her love with all who were blessed to know her.....She was a maker of memories, a natural nurturer, and a constant cheerleader for her girls and their friends.
ruth conrad
January 18, 2021
Moira was so sorry to hear about your mom, she was so lucky to have such a loving daughter. Sounds like she was a remarkable woman. Our thoughts and prayers are with you and your family.
Marylou Schmidt
Friend
January 18, 2021
Wish I had known this good woman, and I am blessed to know her remarkable daughter Moira. Sending love and prayers to Moira and her family.
Melissa Elliott
Friend
January 17, 2021
What a blessing to have known Mary Jane, a treasured friend for many years. Singing to her weekly during the pandemic and our sharing were precious. Such a mind, such joy, deep faith, such love!
Margie Lance
Friend
January 17, 2021
Showing 1 - 5 of 5 results