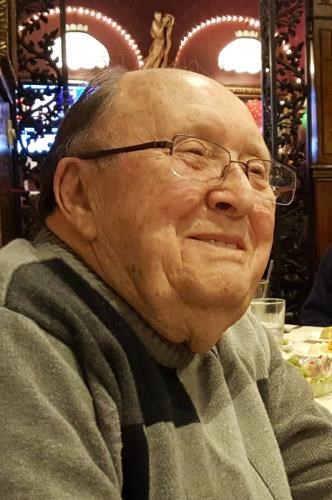 Robert (Bob) V. Engel Sr. of Glen Burnie, Maryland passed away at home, surrounded by family, on November 27, 2021, at the age of 90. He was born in Baltimore, Maryland to the late Herman C. and Jennie Engel. Bob is survived by his beloved wife, Jacqueline Engel (nee Rudolph); his four children Robert V. Engel Jr. (Eleanor), Heidi Pettie (Joe), Pon Middleman (Elke), and Rebekah Raborg (Lou); his six grandchildren, four great grandchildren and nephews and nieces. Also, he is survived by his sister Mildred McDermott and preceded in death by his two brothers, Herman (Bun) Engel and Clarence (Bros) Engel.

Bob is a veteran of the United States Army stationed in Korea and Europe in the 1950s. Afterwards Bob worked as a salesman for Rice's Bakery in Baltimore, MD for ten years. He then worked for Nabisco, Inc, in various positions in the Biscuit and Food Services Divisions. He retired as sales manager, having worked 27 years there. Many within the Nabisco sales teams referred to him as a "legend".

Our Dad was kind, generous, honorable, forgiving and cheerful, always telling jokes. For everyone who knew him, his absence will be a void that can never be filled.

There will be no funeral as Bob wished to donate his body to science. A celebration of Bob's life will be held at a later date.
Published by Baltimore Sun on Dec. 5, 2021.
To plant trees in memory, please visit the Sympathy Store.
MEMORIAL EVENTS
To offer your sympathy during this difficult time, you can now have memorial trees planted in a National Forest in memory of your loved one.
MAKE A DONATION
MEMORIES & CONDOLENCES
Sponsored by The Baltimore Sun.
2 Entries
To Jackie, Pon and Elka one cannot express enough the humor, the way Bob could light up a room, and his somewhat generous ability to help others. Jackie, I so remember Bob and you helping me with my apartment assisting in lining my kitchen drawers with Bob's expert directions, and....yes, his humor. What a loss....
Dolores Noell (Dee)
Friend
December 3, 2021
Becky, so sorry for your loss. Sending you and the family prayers during this difficult time.
Cindy Karras
December 2, 2021
Showing 1 - 2 of 2 results