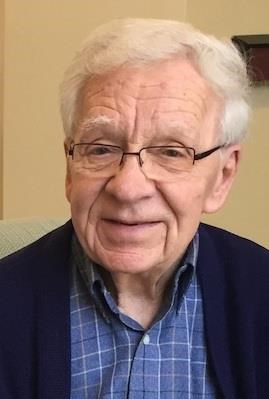 Battle Creek - James Virgil Mobley, 94, of Battle Creek, Michigan, passed away on Thursday, July 8, 2021, at Bronson Hospital, Kalamazoo, Michigan, surrounded by his family. He was born on March 27, 1927, in Tennessee Ridge, Tennessee to Clifford Mobley and Myrtle (Williams) Mobley.

After graduating from high school in Erin, Tennessee, Virgil enlisted in the U.S. Navy. During World War II, he sailed with various Battle Groups throughout the islands in the Pacific Theatre. Upon discharge from the Navy, he attended and graduated from Draughon Business College with a degree in Business Administration. Virgil went on to develop a career with the Department of Defense, for 38 years, retiring in 1987. He enjoyed the extensive international travel opportunities that were part of his work. Virgil was very proud to serve the U.S. Army during the Vietnam War working for 1 ½ years as part of a team that established the supply depot at Cam Ranh Bay, Vietnam.

Virgil married his childhood sweetheart, Bettye on June 22, 1950. Their 68-year marriage was a story of lifelong love and devotion. Their marriage was a role model not only to their family but to everyone around them. He was an active and dedicated member of First United Methodist Church of Battle Creek, serving on numerous committees and service groups. He was continually involved in many charitable causes in the community. Virgil did volunteer work for the Battle Creek Health System for many years. He was a giver, always giving his time, money, and energy to be in service to others.

In retirement, he was a world traveler with his wife and friends. He was a competitive bridge player and enjoyed, with Bettye, the fellowship of their beloved bridge group. He enjoyed following the Detroit Tigers, landscaping and garden work, and being involved with the activities of his ever-expanding family.

Virgil's family was his life. The unconditional love he gave to all members of his immediate and extended family was a source of incredible encouragement, with a beautiful spirit of generosity and joy. His gentle, warm and welcoming personality made his circle of friends ever widening. He was a strong and supportive friend who could bring light and love into every circumstance.

A celebration of Virgil's life and faith will be held at a later date. Internment will take place at Fort Custer National Cemetery. Memorial donations in memory of Virgil may be made to: First United Methodist Church, Battle Creek, MI; South Michigan Food Bank (smfoodbank.org); The Haven (thehavenbc.org); or Hospice Care of Southwest Michigan (hospiceswmi.org). Arrangements entrusted to Baxter Funeral and Cremation Services. www.baxterfuneral.com

Published by Battle Creek Enquirer from Jul. 13 to Jul. 18, 2021.
To plant trees in memory, please visit the Sympathy Store.
MEMORIAL EVENTS
To offer your sympathy during this difficult time, you can now have memorial trees planted in a National Forest in memory of your loved one.
Funeral services provided by:
Baxter Funeral & Cremation Service
MAKE A DONATION
MEMORIES & CONDOLENCES
Sponsored by Baxter Funeral & Cremation Service.
0 Entries
Be the first to post a memory or condolences.