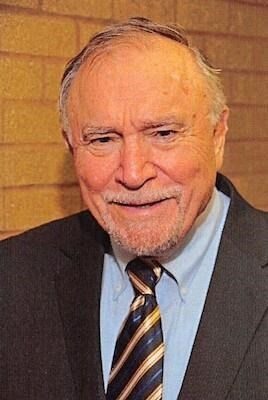 James was always driven and motivated. After graduating from Joliet Township High School and the University of Illinois, he owned an insurance business in Joliet, Illinois. Later, he spent 20 years in the financial field with Merrill Lynch and Principle Financial Securities. He retired from there as a 1st Vice President.

James believed in placing God and his country first. He served on the Will County Illinois Board of Supervisors, and from there, as an Illinois state senator. He served as an Illinois Assistant Attorney General where he directed the Attorney General's Crime Victims Division. He was a graduate of the U.S. Army's Command and General Staff College. He was an Air Defense officer serving on active duty, active reserve, and in the National Guard.

In his retirement, James was active with military historical art and served as an artist with the U.S. Air Force. He was a member of the American Legion Post 52 of Mountain Home, AR and a volunteer at Baxter Regional Medical Center. Along with his beloved wife Sharon (1941-2017), he was an active member of Redeemer Lutheran Church in Mountain Home, where he served many years as a church leader and Elder.

He is preceded in death by his parents, brother Dr. Theodore Bell, and wife Sharon Best Bell.

There are no services scheduled at this time. Arrangements are under the care of Roller Funeral Home. For condolences, please visit our online guestbook at www.rollerfuneralhome.com.

To plant trees in memory, please visit our Sympathy Store.
Published by Baxter Bulletin from May 6 to May 10, 2021.
MEMORIAL EVENTS
No memorial events are currently scheduled.
To offer your sympathy during this difficult time, you can now have memorial trees planted in a National Forest in memory of your loved one.
Funeral services provided by:
Roller Funeral Homes
MAKE A DONATION
MEMORIES & CONDOLENCES
Sponsored by Roller Funeral Homes.
2 Entries
I worked with Jim or JF during the 80's at ML in Midland in the 80's. I and my wife Lee Ann had some memorable travel experiences with Jim & Sharon. I am comforted to think since both were strong Christians, they are together again and for eternity in Heaven.
Tom Coates
Friend
May 30, 2021
Thank you for the wonderful memories. Respectfully Dan, Sandy, Nathaniel, and Adam Parrish.
Dan Parrish
May 9, 2021