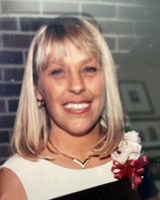 BORN
1952
DIED
2021
Bonnie Lou (Samolinski) Gast
Born: August 21, 1952
Died: August 25, 2021
Bonnie Lou (Samolinski) Gast, 69, of Four Seasons, Missouri passed away on August 25, 2021 at home.
Bonnie was born on August 21, 1952, to Lawrence Samolinski and Elizabeth (Wrobleski) Samolinski. She attended Oglesby grade school and LP High School where she was active in cheerleading and enjoyed spending time with her classmates. After graduating high school in 1970, Bonnie studied nursing at IVCC and had successful careers at both Perry Memorial Hospital and Mayo Clinic in Arizona. She also enlisted in the Army Reserves as nurse during Desert Storm.
She met her late husband Raymond Gast while living in Princeton, IL. Raymond and Bonnie eventually moved to Arizona. Bonnie loved horseback riding, spending time with friends, and visits from family while in Arizona. Eventually, they moved to Four Seasons, Missouri where Bonnie retired from nursing.
She is survived by two brothers, Larry and Dennis Samolinski; her daughter, Michelle Wellard, son Matthew McDonald, daughter-in-law Julie McDonald, and four grandchildren, Cam and Reese McDonald and Dylan and Maya Wellard. She was also stepmother to Joseph and Jeffrey Gast and had two stepgrandchildren, Jeffrey Gast Jr. and Lucy Gast.
Bonnie was preceded in death by her parents Lawrence and Elizabeth and her brother Jeff Samolinski.
The family is planning a celebration of life with close friends and family at a later time.

Published by Bureau County Republican from Sep. 8 to Sep. 11, 2021.
To plant trees in memory, please visit the Sympathy Store.
MEMORIAL EVENTS
To offer your sympathy during this difficult time, you can now have memorial trees planted in a National Forest in memory of your loved one.
MAKE A DONATION
MEMORIES & CONDOLENCES
5 Entries
My condolences to the entire family. I am heartbroken to hear of her passing. I enjoyed working with her at Mayo Clinic Arizona. She was a wonderful nurse and wonderful person. And she had a wonderful sense of humor. With deep sympathy.
Christie Davis
Work
September 30, 2021
Grew up with the family by the boy scout camp by Lowell when they we were kids.
James P Lock
Friend
September 21, 2021
Matt & Michelle, we are so sorry to hear about your Mom. She was a great friend and neighbor. Please know that you and your families are in our prayers at this difficult time.
Mick & Karen Towns
Friend
September 12, 2021
If anyone knew Bonnie they would know that she had a huge passion for the casino. She loved Blackjack more than anything especially when she hit a Top 3. She also loved the slots her favorite one was the Irish one. Bonnie was my friend at the casino and I am truly heartbroken to see her go. I will cherish the times we both got super excited together and always supported each other when we needed a little extra help! Prayers to her friends and family and may she rest easy.
Anonymous
Other
September 9, 2021
Matt ..Michelle & Family I am at a loss for words... There are Friends And Then There are Friends Our Past..Our Present Forever in Time May Gods Gift Of Wonderful Memories Embrace Your Heart and Soul She has left me with so many Memories! Some make me laugh and some make me cry..One thing I know is She will always be Be that "Friend" of mine.....Sam
Debbie Rolando Prey
September 9, 2021
Showing 1 - 5 of 5 results