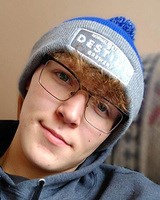 BORN
2002
DIED
2021
FUNERAL HOME
Norberg Memorial Home Inc
701 E Thompson St
Princeton, IL
Chase Allen Morgan
Born: September 27, 2002
Died: August 14, 2021
PRINCETON – Chase Allen Morgan, 18, of Princeton, IL passed away early Saturday morning on August 14, 2021.
Chase, lovingly referred to as Goober by his dad, was born on September 27, 2002 in Terre Haute, IN to Rodney Morgan and Brandy Clawson. He attended Princeton High School and worked at Culvers for a few years before starting his job at Ace Distribution Center, a job he loved.
He was heavily into the Boy Scouts of America, being a Life Scout and Order of the Arrow, just a few steps shy of an Eagle Scout. He loved doing community service.
He and his father went to Camp Butler laying wreaths on all the graves for many years. He also helped with Flags of Freedom and enjoyed marching in the Homestead Parade every year. He loved going fishing almost as much as he loved his Jeep. His Jeep was his greatest accomplishment, and he was so proud of it. Additionally, he loved his siblings, and enjoyed spending time with his family the most, including Gam, Pap, Mamaw and all of his nieces and nephews.
Chase loved going to the creek; he was very outdoorsy and loved spending time outside. He enjoyed music of many genres and working at Ingersoll Scout Reservation, doing the flag ceremonies and assisting with all Scout activities. He was a friend to everyone and knew no strangers. He loved doing the outpost at camp, including the skits and plays which had him in many roles, including Horseshoe Ben and Paul Bunyan; he would even master their accents. When he was little, he would always point out to his dad the men wearing veteran ball caps and would approach them and thank them for their service; he was always respectful. He was always ending his convo with an "I love you" or "Okie Dokie." He will be greatly missed by those who loved him, especially his family.
He is survived by his father, Rodney (Karie) Morgan of Princeton, IL; his mother, Brandy Lynn Clawson of Champaign, IL; his two sisters, Destiny (Kolby Snodgrass) Morgan of Clinton, IA and Gracelyn Morgan of Princeton, IL; one brother, Dalton (Angel) Hall of Paris, IL; his Pap and Gam, Roger and Peggie Morgan of Princeton, IL and Mamaw Cathy Clawson of Paris, IL; two nephews, Brently Hall, Abel Snodgrass; two nieces, Dalila Morgan and Kaylee Hall; three stepsiblings, Hailey Shaw, Bryce shaw and Brayden Shaw; and too many special relatives to list.
Chase is preceded in death by his Papaw Billy Clawson, and Uncle Jimmy Doyle.
A visitation for Chase will be held on Friday, August 20, 2021 at Norberg Memorial Home, Inc. & Monuments from 10 a.m. to 1 p.m. Services will follow Friday, August 20, 2021 at Norberg Memorial Home, Inc. & Monuments at 1:00 p.m. officiated by Pastor Frank Gervasi of Bethel Baptist Church. Graveside services to follow at Malden Cemetery in Malden, IL.
Pallbearers will be honoring Chase; Dalton Hall, Cameron Daugherty, Kyle Daugherty, Weslee Morgan, Bryce Vinard, Philip Morgan, Derek Gilbert, and Dylan Ramsey.
In lieu of flowers, memorials may be directed to Ingersoll Scout Reservation.
Online memorials and condolences may be directed to www.norbergfh.com
Arrangements by Norberg Memorial Home, Inc. & Monuments.
Published by Bureau County Republican from Aug. 17 to Aug. 18, 2021.
To plant trees in memory, please visit the Sympathy Store.
MEMORIAL EVENTS
To offer your sympathy during this difficult time, you can now have memorial trees planted in a National Forest in memory of your loved one.
Funeral services provided by:
Norberg Memorial Home Inc
MAKE A DONATION
MEMORIES & CONDOLENCES
Sponsored by Norberg Memorial Home Inc.
0 Entries
Be the first to post a memory or condolences.