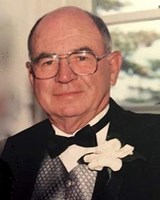 BORN
1930
DIED
2021
FUNERAL HOME
Grant-Johnson Funeral Home
30 W Mechanic St
Princeton, IL
Fred Kimberley Sr.
Born: May 27, 1930
Died: September 14, 2021
PRINCETON – Fred Kimberley Sr., 91, passed away peacefully on September 14, 2021 with his family by his side.
Fred was born on May 27, 1930 in Princeton, Illinois to Ralph and Laura (Drake) Kimberley. He served his country as a Corporal in the United States Marine Corps and is a veteran of the Korean War.
On July 17, 1955, Fred married Lydia Bazan in the First United Methodist Church in Princeton. He worked as a tool and die maker at LCN Door Closers for 40 years.
He was a lifelong member of the Princeton Elk Lodge as well as a member of the Princeton Moose Lodge where he served a term as Governor. He served more than 60 years in both organizations.
As a young man, Fred excelled in sports and especially softball, baseball and ice hockey. He was an avid bowler and is a member of the Princeton Bowling Hall of Fame. As a dedicated golfer, some of his favorite memories were his 2 holes in one, playing in the John Deere Classic Pro Am along side professional golfers as well as mentoring young players. He was also a Little League Baseball coach.
Fred especially loved spending time with his many friends playing sports, traveling to their favorite fishing holes and playing a game of cards over a beer or two.
He is preceded in death by his parents and his brothers and sisters, Lyle (Lucille) Kimberley, Velma (Willard) Swanson, Glenn (Helen) Kimberley, Mildred Kimberley, Ralph Jr. "Junie" Kimberley and Betty Kimberley.
Fred is survived by his wife, Lydia Kimberley, his three children, Fred (Kelly Bickett) Kimberley Jr. of Malden, Scott Kimberley of Peoria, and Rita (Ned) Merrick of Kronberg, Germany; his grandchildren, Mason Kimberley, Vaughn Kimberley, Zia Kimberley and William Merrick.
A celebration of life will be held from 12:00 noon - 3:00 p.m. Sunday, September 26, 2021 at the Princeton Moose Lodge. Memorials may be directed to Mooseheart Child City and School https://www.mooseheart.org/. Online condolences may be sent to www.grant-johnsonfh.com.

Published by Bureau County Republican from Sep. 16 to Sep. 18, 2021.
To plant trees in memory, please visit the Sympathy Store.
MEMORIAL EVENTS
To offer your sympathy during this difficult time, you can now have memorial trees planted in a National Forest in memory of your loved one.
Funeral services provided by:
Grant-Johnson Funeral Home
MAKE A DONATION
MEMORIES & CONDOLENCES
Sponsored by Grant-Johnson Funeral Home.
0 Entries
Be the first to post a memory or condolences.