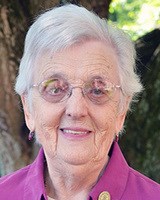 BORN
1927
DIED
2021
FUNERAL HOME
Mattingly Funeral Home - Loretto
195 Holy Cross Road
Loretto, KY
Sister Jean Johnson
Born: May 12, 1927 in Maytown, IL
Died: August 15, 2021 in Nerinx, KY
Loretto Sister Jean (formerly Sister Regina Rose Burke) Johnson died August 15, 2021, at Loretto Motherhouse Infirmary in Nerinx, KY. She was 94 and in the 46th year of her Loretto commitment.
She was born May 12, 1927, in Maytown, IL, to Daniel and Elizabeth Burke. She was received into Loretto April 25, 1945. She earned a bachelor's in education, with a minor in social studies, from Nazareth College, an R.N. from Sts. Mary & Elizabeth Hospital School of Nursing, and a bachelor's in nursing from Spalding University, all of Louisville. In her early years as a Loretto, Sr. Jean taught elementary grades in parochial schools in Louisville, Denver, St. Louis and Arlington, Va. As a nurse, Sister Jean served as administrator of the Loretto Motherhouse Infirmary, where she worked diligently to provide exceptional care to the sisters. Sr. Jean was dispensed from her final vows in 1970. She took a job as director of nursing for Jewish Hospital School of Nursing, Louisville, and intended to complete a master's of nursing in mental health when she met Clarence R. Johnson of New Haven, KY, a widower with 10 children. She and Clarence married in 1973. Jean took on the new role of wife, stepmother and grandmother while continuing her work as a nurse. The couple were married for 15 years before Clarence died in 1988. They shared a deep Catholic faith and enjoyed traveling and hosting family gatherings. In 1995, Jean once again began classes at Spalding University. She studied centering prayer and theology, eventually becoming coordinator of Centering Prayer and Contemplative Outreach for the Louisville area. With a deepened desire to return to the vowed state of life as a Sister of Loretto, she rejoined the order in 2005, making her final vows March 19, 2009. Sister Jean led a beautiful, faithful, prayerful life until her death.
She was preceded in death by her parents and siblings; her loving husband Clarence; stepchildren, Mary Dean Beyke (Jim), Joseph Hayden Johnson (Barb), Rose Marie Johnson, Bobby Johnson (Guyula), Nicholas Johnson Sr. and Chris (Redeye) Johnson (Kim); and one grandson, Robert K. Johnson.
Sister Jean is survived by her stepchildren, Phil Johnson (Margaret) of Bardstown, KY, Kevin Johnson (Marie) of New Palestine, Ind., Jack Johnson (Carol) of Bardstown, and Karen Downs (David) of Bardstown, 27 grandchildren, 46 great-grandchildren and 8 great-great-grandchildren. Jean also had 50 nieces and nephews in Illinois.
A wake for Sr. Jean will take place at 3:30 p.m. Eastern time, Monday, August 23, at Loretto Motherhouse. Her funeral Mass will be celebrated at 10 a.m. Eastern Time Tuesday, August 24, at Loretto Motherhouse Church. Memorials may be made to the Sisters of Loretto for mission, c/o Loretto Motherhouse, 515 Nerinx Road, Nerinx, KY 40049 or as an online gift at www.lorettocommunity.org.
Published by Bureau County Republican from Aug. 19 to Aug. 21, 2021.
To plant trees in memory, please visit the Sympathy Store.
MEMORIAL EVENTS
Aug
24
Funeral
Loretto Motherhouse
KY
Aug
24
Burial
Loretto Motherhouse
KY
Funeral services provided by:
Mattingly Funeral Home - Loretto
MAKE A DONATION
MEMORIES & CONDOLENCES
Sponsored by Mattingly Funeral Home - Loretto.
4 Entries
Heaven gained an amazing lady. Aunt Jean was not only my dads sister she was an inspiration to me. Among many things she taught me the true meaning of family, faith, love and friendship. RIP Aunt Jean. Much love..Mary Lou
Mary Smoot
Family
August 22, 2021
May her soul Rest In Peace. She was a lovely lady. She taught me and others ‘“The Centering Prayer Method”. May God heal the broken hearts of her family and friends
Shirley Hutchins
Friend
August 20, 2021
Jean was a fine lady, a great companion to Clarence, and a blessing to all of us. She will be missed by many.
Guyula JohnsonJohnson
August 18, 2021
You have our sympathies.
Junie, Carolyn and Alan Mattingly of Mattingly Funeral Home
August 18, 2021
Showing 1 - 4 of 4 results