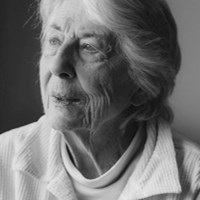 BORN
1928
DIED
2021
FUNERAL HOME
Grant-Johnson Funeral Home
30 W Mechanic St
Princeton, IL
Jeanne Anne Austin
Born: January 7, 1928
Died: September 10, 2021
Jeanne Anne Austin, adored wife, mother, and grandmother, passed away on Friday, September 10, 2021, at the age of 93.
Jeanne was born January 7, 1928, in Owatonna, Minnesota; daughter of Paul and Ethel (Golden) Ochs, the second generation of immigrants from Germany and Ireland. After graduating in 1945 from Owatonna High School, she was employed as a secretary in a local law firm until her marriage to John Edward Austin on August 6, 1949.
John and Jeanne moved their growing family of four children to Princeton, Illinois, in 1959 when John accepted a new position with the Jostens' scholastic division. Their fifth and youngest child was born the following year. In 1968, the husband-and-wife team founded and operated their own awards business, A&M Products Company, working out of the basement of their home until moving to their current location on Elm Place in Princeton. Jeanne was an office administrator for the successful firm until retiring in the late '80s.
Jeanne was a dedicated member of St. Louis Catholic Church, serving on several boards and teaching catechism classes to teenagers. In addition, she was a fun and passionate leader for Cub Scouts and Campfire Girls, who reveled in the outings and activities she planned. In retirement, her favorite volunteer work soon involved Friends of the Library where she organized their annual fundraising book sale and supported the successful move into the new library building on Peru Street. Jeanne received the first annual award from Princeton's Friends of the Library in recognition of her outstanding contributions.
Memories of Jeanne will be for many things, including her devotion to her husband, family, and golden retrievers. She practiced faith and kindness to friends and those in need. Jeanne loved her home and their surrounding prairie, wildlife, and birds that were a part of her daily life, where she demonstrated an eye for aesthetics and beauty. Her enjoyment of books, history, and working extensively on researching the family's heritage were some of her passions. She relished a good bout of wordplay, music and melodies, a joke, and a laugh and sharing a dram of Jameson with family at the end of her day. She loved being a nurturing mother and grandmother, making the world's best potato salad and delicious cookies. In short, she was beautiful, and her family will miss her so. Jeanne is preceded in death by her beloved husband, John E Austin, who passed suddenly two months after celebrating their 60th wedding anniversary. And a very witty son, David C Austin, who passed in 2018. She is survived by three daughters and one son: Katherine Austin (Bruce Chandler), Harpers Ferry, WV, Mark Austin (Patty Austin) Princeton, IL, Amy Austin (Deirdre Joy) Washington D.C., Mary Liz Austin (Terry Donnelly), Vashon Island, WA. Also surviving are nine grandchildren: Eric Herbolsheimer, Springfield, Illinois, Katy (Andrew) Lindberg, Hastings, Minnesota, Andy Austin, (Brittany), Princeton, Erin (James) Morrison, Knoxville, Tennessee, Maggie (Phil) Ernst, Wilmington, North Carolina, Patrick Arabia, Princeton, Eli Austin, Adelaide Joy, and David Austin, Washington D.C. and eight great-grandchildren, Miranda, Alison, Zachary, Ella, Thomas, John, Leah, and Matthew. Also, her large extended family of nieces and nephews kept in close contact with her throughout her life.
The family would like to thank the staff of Lacon Rehab & Nursing for four years of their loving care.
The family will be receiving visitors at Grant-Johnson Funeral Home, Princeton, Illinois on Friday, October 8 from 4:00-6:00 pm. A 10:00 am mass, the following day, October 9, 2021 will be held at St. Louis Catholic Church and followed by a graveside service.
Memorials can be made to Princeton's Friends of the Library. Online condolences may be sent to www.grant-johnsonfh.com.
Published by Bureau County Republican from Oct. 4 to Oct. 6, 2021.
To plant trees in memory, please visit the Sympathy Store.
MEMORIAL EVENTS
Oct
8
Visitation
4:00p.m. - 6:00p.m.
Grant-Johnson Funeral Home
30 W Mechanic St, Princeton, IL
Oct
9
Funeral Mass
10:00a.m.
St. Louis Catholic Church
IL
Funeral services provided by:
Grant-Johnson Funeral Home
MAKE A DONATION
MEMORIES & CONDOLENCES
Sponsored by Grant-Johnson Funeral Home.
2 Entries
Sorry to hear of the passing of your mom Amy. Your mom and dad treated me like family when I worked for them when they opened A&M products. They were very nice and special folks. Good times and good memories of their kind friendship.
Brian Brutcher
Work
September 23, 2021
A wonderful woman with a great family. Rest In Peace
David flaherty
September 15, 2021
Showing 1 - 2 of 2 results